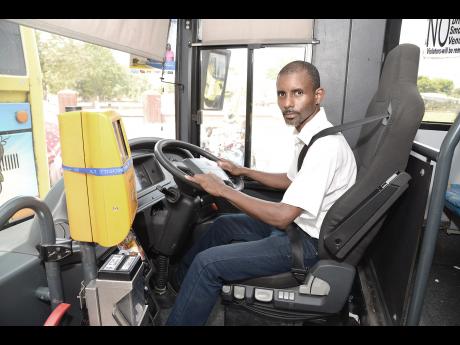 Forty-year-old Jamaica Urban Transit Company (JUTC) bus driver, William Foster, gave a gentle reminder that honest people still walk among us when he returned the wallet a passenger lost in his bus one day earlier.

The owner of the wallet, Everold Creighton, had given up hope of recovering his bank cards, health card, other important items and the sum of US$22 when he discovered that he had lost his wallet last Thursday.

But last Friday his wallet was returned to him, with all contents intact, by the JUTC driver who had found it.

"I have to big up this driver, because him make me feel so good to see that there is honest people in the society still," said Creighton.

"Seeing that I got back everything, nothing was missing; he is really somebody to be commended," added Creighton.

But for the bus driver, this was nothing special as he was raised by his mother and grandparents to be honest and fair. Those values have remained with him to this day.

"They always tell me to 'do unto others as you would have them do unto you'. So I just live by that principle," said Foster.

According to Foster, he found the wallet while doing his regular rounds after each trip to see if any valuables were left behind.

"I knew that the next morning I would see him again, because these passengers are regular, they travel on certain routes," said the father of three, who is soon to be married to Sophia Black.

"So I just say like how mi a go see him tomorrow, instead of to go through all the rigmarole to go to the depot and everything, I am just going to hold it and when him come tomorrow I give him."

"When I reached my workplace, I was working and didn't realise that I didn't have the wallet. I had borrowed a $1,000 from somebody and was going to put it in my wallet, but when I feel in my pocket there was no wallet," said Creighton.

"I started looking all over the place and couldn't find it, so I decided that I was going to retrace my footsteps."

He then called his daughter and asked her to check the dispatcher in Christian Gardens to see if anybody had left the wallet there, but none had been left, leaving him to think he would have to go through the hassle of replacing all his personal documents.

"So this morning (Friday) I went back out and I saw the same driver and I asked him, 'did you see a wallet on the bus yesterday?' and him say 'a you? Yeah, man, I have your wallet'.