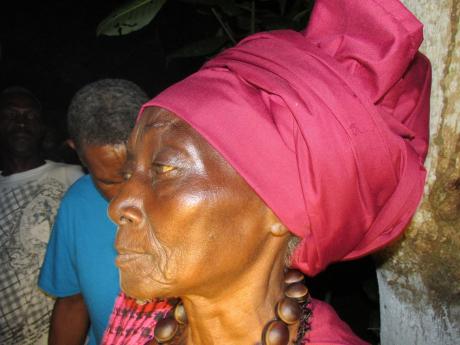 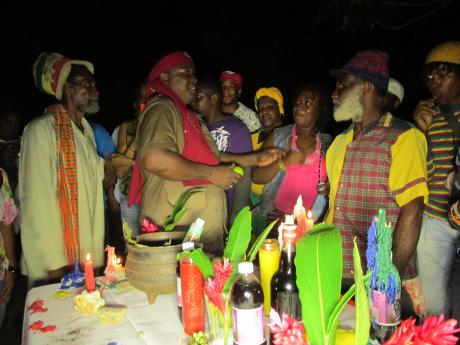 Paul H. Williams
King David jokes with a patron before sharing an item from his Revival table with her at the Paul Bogle vigil in Stony Gut on Saturday night.
1
2

It was billed as one of the major events of the commemoration of the 150th anniversary of the Morant Bay Uprising, and people turned up on Saturday night at Stony Gut, St Thomas, in great numbers, in the dark.

Nevertheless, it was a festive atmosphere. Anticipation of staying up all night to observe the day, 150 years ago, when peasants, some born in slavery, walked from Stony Gut to Morant Bay to register their ire at the injustice that was being meted out to them. It is said also that before they left Stony Gut, they ritualistically asked their ancestors to guide them.

There was much ritual also on Saturday. The Revival table loaded with food and miscellaneous objects was delightfully set. After the revelry around it, the setter, King David, shared the edible contents with patrons. Not far from the Revival table were the Kumina drummers, singers and dancers. They were getting into high spirit when a stage show of sort started, competing with the Kumina ritual.

CACOPHONY IN THE DARK

The juxtaposition of the traditional against the contemporary created a cacophony in the dark in which people danced around the Kumina ring. Cellphone lights prevented a total blackout. Some minutes after one o'clock, when the fire dancer was ready to light up the place, the rain came, and all 'hell broke loose'. The drums stopped and the drummers fled.

People scurried in the pitch-black night through the stony and uneven ground. Some huddled under trees, but when the lightning started, the trees were no longer refuge. Those who were on the west side of the covered bridge ran towards it. It was crammed, and nobody moved. As the rain poured, confusion reigned.

When those who were stranded realised that the people on the bridge were not budging, they jumped into a gully and scrambled up a slippery incline in search of shelter, but there weren't many places to seek refuge. In addition to the absence of tent shelters and proper lighting, the sanitary facilities were woefully inadequate as there was no running water in the bathrooms or on the property. For many, it was miserable.

It took a while for the rain to ease, and when it did, the grounds were soggy. With the Kumina and stage show people scattered, there was absolutely nothing else to do but to sit or stand and wait for over four hours. Soon after dawn broke, people hurriedly left to start the walk to Morant Bay, and it also rained on that parade.