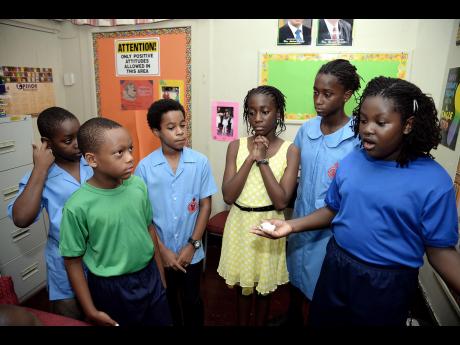 "Find a way to save this generation," was the urgent plea from Ajani Hickling, a grade six student at St Andrew Preparatory School.

Hickling was echoing the sentiments of a group of classmates as they sat down with The Gleaner yesterday to discuss the problem of child murders in Jamaica.

The other students - Amir Clarke, Alex Clarke, Danielle Ricketts, Sontae Reid and Shayne Brown - added their own analyses and proffered a number of possible solutions to address the crisis.

"I don't know why these gunmen want to target the future, because if they are killing the children, they are just going to hurt Jamaica's future ... . These people must be crazy because we want a better environment for the children to be safe and protected, so I don't know why they should be doing this, but it has to stop," Alex said.

Danielle pointed out that murderers target children because of the general problem of evil which pervaded the world, while Ajani argued that the vulnerability of children made them easy targets.

Turning their minds to possible solutions, Sontae and Shayne called for cameras and billboards to be strategically placed.

"Instead of using those billboards for advertising watches and stuff like that, we could use most of them to put child-safety rules, and instead of changing them really quickly, we could keep them on a few times," Sontae said.

In giving her ideas for solutions, Shayne said: "I think that they should start setting up police posts near some schools or near the roads, and I think they should start putting some cameras on the roads so the Government would be videoing and watching what is happening on the streets."

Another novel solution came from Ajani, who wants a specific group to be set up to deal with the issue of child murders.

"We could get all the organisations that help children and ask them all to make a division that helps with child murder, and those divisions could maybe meet once or twice a month to talk about the problem," he said.

"Some of the organisations are focused on helping children, but they don't focus mainly on one thing most of the time, so if they could have one division that would focus on that from different companies and they could pool their resources together to help that specific thing."

Amir suggested that police personnel be appointed to protect children within specific communities but was countered by Danielle, who was concerned that the police force is too corrupt.

"If we could import policemen from other countries, that may help," she said.

She also called for neighbourhood watches to be revived and scaled up.

"The neighbourhood watch - people think that it is simple, but if every community had one, that would be really good."