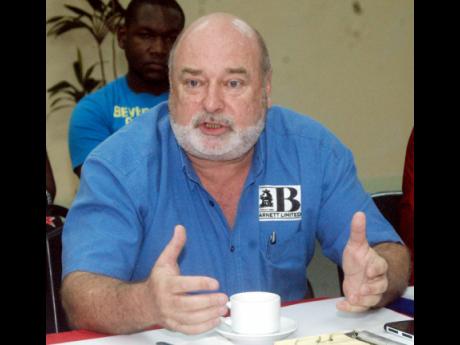 "Montego Bay has grown in some very, very good ways. But (there has been a) lack of planning and lack of parallel investment by the Government. Social infrastructure has been lacking, and we are now paying the price for it. Since the 1960s when there was a drive for tourism, investors created jobs, but the Government didn't put in the housing; or put in the schools, or the police (stations); they didn't put in the social infrastructure," the businessman said, while addressing a Gleaner Editors' Forum in Montego Bay.

"The same thing happened in the '80s with the 807 projects. Thousands of people came to Montego Bay, but the housing was never done. That is why we have these many squatter communities right now. I am a firm believer that things will not change until we retrofit these communities and find a way to put the parcels of land that the people have built on into their hands with a title that they can leverage as collateral for loans for education or business development."

Kerr-Jarrett said he had put forward a proposal in 2000, while he was president of the Montego Bay Chamber of Commerce, for the employer contributions from the National Housing Trust (NHT) to be used to regularise some of the housing settlements, as well as put in infrastructure and thereafter transfer lands to the residents, "for the cost of the infrastructure plus the administration".

"We have to find a way and there is a way to do it. The employer contribution is about $10 billion a year to the NHT and those go directly to reserves. They don't even pass through the profit-loss accounts," said Kerr-Jarrett.

"That money needs to come back in to do what the NHT is responsible for. The NHT is a finance organisation. It is not a planning, implementation or design organisation."

Added Kerr-Jarrett: "Unless you get people living in a more humane and civilised environment, you are not going to be able to fight crime. Crime thrives in chaos. That is what we have got up there in a lot of these communities. Illegal tenancy is enforced by illegal means, which keeps the community in such chaos that not even the police want to go there."

He continued: "You give people a title, ... proper roads; ... an address; you put them on the government payroll for taxes; ... (and) start to formalise the economy, (then) they are going to now use the legal means to enforce their tenancy.

"If there is a noise problem, they are going to call the police because they know nobody can come and bulldoze their house. They are paying through their taxes to contribute to society. Right now, they are being forced on to the fringes because they have no rights."