Scientist says Germs that killed 18 babies Could Have Been Controlled 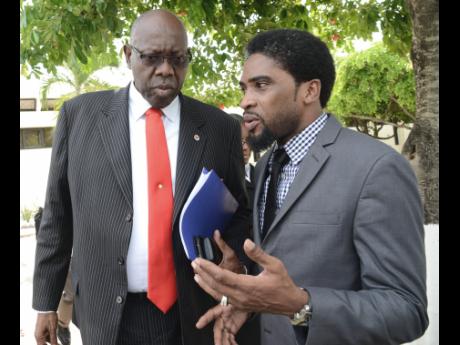 Rudolph Brown
Minister of Health Dr Fenton Ferguson (left) speaks with Dr Andrei Cooke, chairman of the South East Regional Health Authority, after a press conference at Jamaica House in Kingston, yesterday, on the outbreak of klebsiella and serratia, which caused the deaths of 18 babies.

AT LEAST one microbiologist is saying that more could have been done to prevent the outbreak of deadly bacteria at two of the country's major hospitals, which has claimed the lives of 18 babies.

Clinical scientist and microbiologist Anthony Jones has indicated that less-than-acceptable hygiene practices could have caused this latest nightmare to strike the health sector.

Jones was speaking with The Gleaner yesterday after the health ministry disclosed at a press conference that since the start of the year, 18 babies have died because of an infectious outbreak at the University Hospital of the West Indies in St Andrew and the Cornwall Regional Hospital in St James.

It was revealed that the infections have been caused by the klebsiella and serratia bacteria; however, Minister of Health Dr Fenton Ferguson said that he only learnt of the situation last Friday. That was the same day that it was first reported in the media.

At the press conference, held at Jamaica House, National Epidemiologist Dr Karen Webster noted that there have been four outbreaks involving the bacteria-causing infections, which have resulted in 42 cases in total.

She said one outbreak took place during July at both hospitals, and the others, which are ongoing, started in September.

The microbiologist noted, however, that control mechanisms should have been urgently implemented.

"Infections like these are not uncommon. I have worked in several hospitals in the United States, and these occur from time to time; however, it could have been controlled, and there are a number of things that need to be done, which means the epidemiology department needs to be on top of things. There seems to be a deficiency in the hygiene situation," he declared.

"There is what is called a sensitivity profile, which an epidemiologist can use as a guide. Therefore, if the epidemiologist was the one doing the surveillance, they would note that the profile of the klebsiella that infected the first child is the same bug infecting the other child," he explained.

"Then there was a third and fourth child. This should have sent a signal, which would have triggered some sort of control mechanism, maybe placing the infected child somewhere else," the microbiologist told The Gleaner.

He also pointed out that a major solution going forward will have to include vigilant monitoring of the areas in which newborns are kept, which means proper sanitisation.

"I would say, moving forward, that a serious infectious disease control committee be established, which would include an epidemiologist, clinical scientist, microbiologist, and monthly meetings are done. The maintenance department will also be very critical. People who do the laundry; people who administer the food have to be properly sorted out," he advised.

"The water being used, is it tested? Did they test the ventilation? Do they know if the nurses in the area are the actual carriers of the infection? People coming into the area could have brought it there because these bacteria will go anywhere they can go. Therefore, the neonatal area is so critical. It needs to be treated with utmost care," he charged.

Jones also indicated that the overuse of antibiotics plays a role in the susceptibility of humans to these infections.

"Patients oftentimes are looking for fast results, and doctors tend to give what is known as broad-spectrum antibiotics, and that is causing all the problems we are having and will continue to haunt us for a very long time. Anytime an antibiotic is given by a doctor, it should be accompanied by a sample to be tested for bacteria," he warned.

Similarly, Dr Marie Brown, resident urologist and former second vice-president of the Jamaica Medical Doctors Association, said something needed to be done to tackle the use of antibiotics.

"What we have been finding now is that a lot of organisms that used to be sensitive to antibiotics are now becoming resistant because of the overwhelming use of antibiotics because people now use these things for every reason, and that is actually leading to a increased-resistance pattern in almost all organisms," she said.

"Klebsiella is a very prevalent one, and it has led to this number of babies dying, which is pretty alarming, and we are probably getting a look into the future where this could increase drastically," Brown continued.

Webster noted that a number of measures have been put in place to mitigate against the issue, including increased sanitary measures to ensure that neonatal areas are kept clean.

Ferguson said, after learning of the situation on Friday, that a team had been immediately assigned to conduct investigations and to provide guidelines for case management.