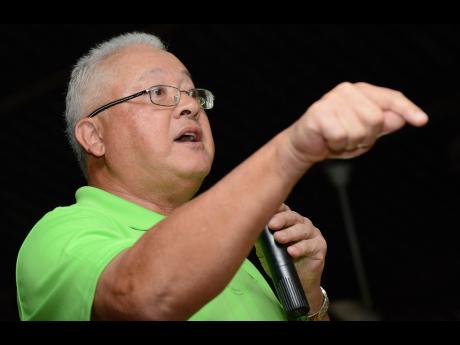 The parliamentary Opposition has ratcheted up its resistance to the Government’s push to have the Caribbean Court of Justice (CCJ) installed as the nation’s final appellate court, declaring yesterday that it is prepared to mount a constitutional challenge all the way to the Judicial Committee of the Privy Council in the United Kingdom.

And if that fails, Delroy Chuck, the Jamaica Labour Party (JLP) spokesman on justice, has warned that the party would “use a simply majority of Parliament” to ditch the CCJ if it wins State power in the next general elections.

"The only way the CCJ can be the final appellate court is when we put it to the people and we say to the people 'do you want the CCJ or you want a final Jamaican court' and let the people of Jamaica make that decision," Chuck vowed yesterday during a Jamaica Labour Party (JLP) Area Council One meeting in St Andrew.

Chuck, who is also an attorney, warned that if any JLP senator broke ranks and voted with their government counterparts, they are going to be embarrassed.

"If one, two, or eight [JLP] senators make the error [and vote for the bills], not only would they be embarrassing themselves, but what they would do is cause the Labour Party to expend money to take these three bills to the Supreme Court, the Court of Appeal, [and the] Privy Council," Chuck cautioned.

Members of the House of Representatives have already voted by a two-thirds majority to pass three bills that are aimed at having the CCJ replace the Privy Council as the country's final appellate court. The bills are now being debated in the Senate and will need the vote of at least one opposition senator and all 13 government senators for them to be passed.

But, according to Chuck, the JLP's pending legal challenge is based on the view that the bills "do not sit well with the Jamaican Constitution". He predicted that none of the eight opposition senators would vote in favour of them.

However, former Justice Minister K.D. Knight disagreed, arguing that the move to have the CCJ entrenched through a two-thirds majority would satisfy the scheme of the Constitution as well as a previous Privy Council ruling on the issue.

Knight, who is an attorney-at-law, also took aim at calls by the parliamentary Opposition for a referendum that would make the CCJ deeply entrenched in the Constitution.

"This request for it to be deeply entrenched really has neither a logical foundation nor a legal one," he told The Gleaner yesterday.

Opposition Senator Arthur Williams, who many believe is likely to break ranks and vote in favour of the bills, said yesterday that his colleague's comments would have no bearing on how he votes.

Knight also chimed in saying Chuck's assertion "does not have the logical force that would cause anybody to change an opinion".

With JLP delegates urging him on, Chuck also made it clear that if the JLP's legal challenge to the CCJ bills was unsuccessful, that would not be the end of the issue.

"If they put the CCJ in section 110 of the Constitution, the next JLP government, which will be in power later this year or next year ... whenever the elections are called, we are going to use a simple majority to remove it," he emphasised.