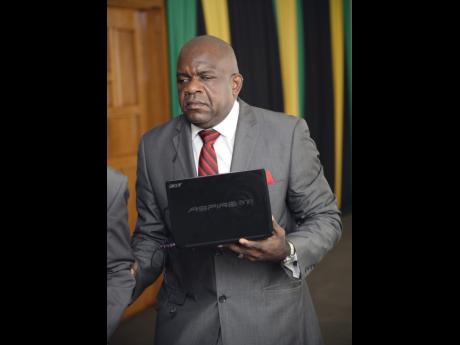 Jermaine Barnaby
Senate President Floyd Morris making his way to a press conference at Gordon House yesterday, armed with the video evidence that challenge claims that Senator Marlene Malahoo Forte was suspended from the Senate while on a bathroon break.

President of the Senate Floyd Morris yesterday presented video evidence with the assistance of Kevin Williams, marshal to the Houses of Parliament, challenging claims by the general secretary of the Jamaica Labour Party (JLP) that Senator Marlene Malahoo Forte was suspended while on a bathroom break, last Friday, in the Upper House.

Williams, in his presentation of the video, indicated that from 2 p.m. until about 2:25 p.m., video from security cameras covering various sections of the House did not produce any proof that Senator Malahoo Forte left the dining room to go to the bathroom.

He pointed specifically to footage from a camera, which covers the corridor leading to the dining room and the ladies' room, and stressed that at no point within the period that the senator was outside the chamber had she entered the bathroom.

Asked if the video could have been edited to provide one side of the story, Williams said he was willing to make available to anyone the complete footage captured by the security cameras last Friday within the precincts of Parliament to substantiate the sequence of events.

Chang said that he found it disturbing that A.J. Nicholson, leader of government business in the Senate, had attempted to have Malahoo Forte "taken from the ladies' room and brought to the floor of the Senate".

Morris, who took the video evidence to a press conference at Gordon House yesterday, also commented on "an open letter" from a JLP group to Prime Minister Portia Simpson Miller alleging that the marshal went to "retrieve" Malahoo Forte from the ladies' room. The president claimed that the letter stated: "Upon hearing that she had gone to the ladies' room, they sent a male marshal to retrieve her from it, disregarding any code of decency, her dignity, and right to privacy ... ."

"Those public statements are not true," Morris charged, pointing out that Malahoo Forte's interaction with the marshal occurred when he located her in the dining room.

"When I heard that the marshal had gone to the bathroom to get the member, it was my duty to check and investigate if that was so, and I resorted to the information on the security system," he added.

The president argued that independent camera evidence confirmed that for the approximately 30 minutes that Senator Malahoo Forte was out of the chamber, she was in the dining room of Parliament.

"The senator was sitting in the lunch room all this time and sending back unreasonable answers to me, disrespecting the Senate and disobeying my instructions. That amounted to contempt and warranted suspension," the president declared.

At the same time, Morris has made it clear that the suspension of Malahoo Forte would be lifted as soon as she emailed a copy of the disputed letter she first introduced last Thursday to the president and clerk to the Houses of Parliament.

The Senate president has said that he has no reason to apologise to Malahoo Forte, as requested by Opposition senators, because he acted in accordance with the Standing Orders.

"As president of the Senate, it is my duty to stop any initiative to derail anything that will bring the Senate into disrepute," he said.

He pledged to "do all in his power" to facilitate a continuation of debate on three bills to establish the Caribbean Court of Justice (CCJ) as Jamaica's final court of appeal.

Morris noted that Malahoo Forte was given four opportunities to present the letter and she failed to do so.

In her contribution to the CCJ debate last Thursday, Malahoo Forte read from a letter which indicated that the Privy Council in 2010 had written to then justice minister Dorothy Lightbourne stating that it was willing to travel to Jamaica to hear local appeals.