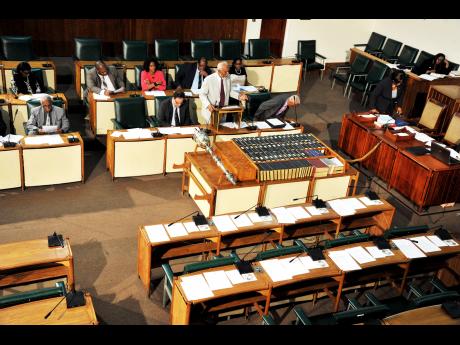 Norman Grindley
Yesterday’s sitting of the Senate without the Opposition senators, who staged a boycott.

President of the Senate Floyd Morris has spurned an ultimatum from Opposition senators that he apologise or acknowledge that he erred in suspending Marlene Malahoo Forte from the Senate last Friday before they return to Gordon House, the seat of Jamaica's Parliament.

Tom Tavares-Finson, leader of Opposition business in the Senate, made the request in a letter to Morris on Thursday. But in a terse reply, the president told The Gleaner, "I can't reward bad behaviour by apologising."

Morris also said they "have to come to the Senate and use the provisions under the Standing Orders to state their case". He said last night that he was prepared to accommodate, in Parliament, any motion brought by the Opposition to discuss matters they have raised, but would not be conducting the business of the nation in the media.

Meanwhile, Justice Minister Mark Golding described the role of the Senate in determining whether Jamaica accede to the Caribbean Court of Justice (CCJ) as its final court of appeal as "one of the ironies of history", noting that it is an unelected group of parliamentarians who will determine the country's final court.

The continuation of the debate on the CCJ bills has become uncertain following the boycott of yesterday's sitting of the Senate.

In urging Opposition senators to return to the Parliament and participate in the debate, Golding said that "It is one of the ironies, perhaps, of history that an unelected Senate ultimately will determine whether or not the people of Jamaica, who elect their government, will be able to have access to a final court, through legislation that has been passed by the House of Representatives by the required majority of two-thirds," Golding said.

With one of the bills proposing to entrench the CCJ in Jamaica's Constitution as the final court of appeal, at least 14 senators must vote yes to secure its passage.

The Opposition, which has been calling for the matter to be put to a referendum, voted against the bills in the House of Representatives, but with the Government having a 2:1 majority, the bills were passed.

In the Senate, however, there are only 13 government senators, and if they refuse to break party line and vote for the bills, the CCJ bid would die unless there is support from the Opposition.

Opposition Senator Arthur Williams, widely thought to be the one most likely to break ranks with the Opposition and vote for the CCJ bills, said yesterday that there was no use bemoaning the role of the unelected Senate as Golding has done.

"Our founding fathers deliberated and they came up with a system. If we feel it needs to change, we must change it, but until it changes, that is the system. It is an important check and balance which seeks to ensure consensus between Government and Opposition," Williams said.

He said, however, that the CCJ debate should not be allowed to die as a result of an impasse between Government and Opposition, which came to a head last Friday with the suspension of Marlene Malahoo Forte from the Senate.

"There is no sense in starting a debate of that importance and not considering it," said Williams who sided with his seven Opposition senators to boycott yesterday's sitting.

"It is not a trivial matter by any means. It is an important matter for Jamaica. It is necessary for the country that we continue the debate, conclude it and vote, and whatever happens, happens, but we must complete it," Williams said of the debate on the CCJ bills.

Williams, who along with Dr Christopher Tufton were the only Opposition senators in the chamber last week, when Malahoo Forte was suspended, said he had always held the view that "the suspension was unlawful".

Neither man voted against the motion to suspend Malahoo Forte. But yesterday, Williams told The Gleaner that he was confident that Malahoo Forte breached no order that was made by the president and that he has no authority under the Standing Orders to summon a senator to the chamber.

"Although you have rescinded the suspension, there are important lessons going forward as to how the Senate must operate," Williams said.

Government senators voted unanimously to lift the suspension on Malahoo Forte yesterday, following the presentation of a letter from the Privy Council by Golding.

Malahoo Forte was suspended after she failed to hand over to Morris, the letter, from which she quoted during the debate. He had repeatedly requested them. Morris, who shunned calls from the Opposition to apologise, said he would not do so. He also said he had only moved to lift the suspension in the national interest.

In supporting the motion for the lifting of the suspension, K.D. Knight said that the CCJ debate was bigger than the country's political parties.

"The PNP (People's National Party) and the JLP (Jamaica Labour Party) combined, form only a percentage of the society. This debate is about the entire society - anyone in being and those yet unborn," Knight said.

He argued that the CCJ is a "big debate", which could have a "big impact" on one of the most important pillars of a society - the justice system and one of the three arms of government".

"It is a big issue that we are debating, and it needs a big kind of thinking to progress it. It is not a matter that can be allowed to just slither away because of small thinking. There is a high ground up there, and we have to get to that high ground ... putting country before party and putting people before self," Knight said.