Urgent Labourites ready to 'save' Jamaica 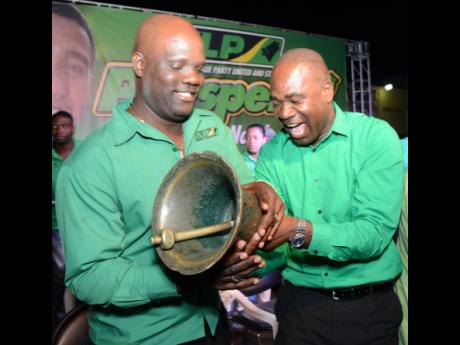 Ian Allen
Othneil Lawrence (left) and Xavier Mayne play with a huge bell that was being carried around by a JLP supporter during a mass meeting in Alexandria. 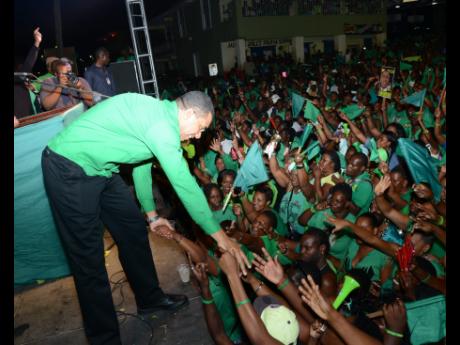 There were signs of heightened anticipation among platform speakers of the Jamaica Labour Party (JLP) during its mass rally on Sunday, in Alexandria, St Ann South West.

Their sense of urgency, they hinted, was an impending "explosion" on the political landscape.

In typical platform fashion, Desmond McKenzie, the Western Kingston member of parliament and party stalwart renowned for his abilities to work green-clad crowds at JLP rallies, urged supporters to be on high alert this week.

"We are expecting to hear something whether in the week or weekend. We expect to hear," declared McKenzie.

"Jamaica needs to be saved, so be on the lookout."

McKenzie's was just one in the chorus of calls on the Labourites to be at the ready.

JLP leader Andrew Holness brought the curtains down on the mass rally, putting the cap on a colourful night with an entreaty of his own.

Holness declared that he has made no election promises but has, instead, given firm commitments in the three pillars of education, health and security that will materialise in short order to propel economic success.

But he stressed that Jamaicans will have to head to voting booths on election day to ensure that the necessary change is effected.

An upbeat JLP candidate, Xavier Mayne, labelling Dr Keith Walford, the member of parliament for the St Ann South West constituency he has his eyes on, as "One-Term Wally", to the merriment of the crowd in an area regarded as a traditional green zone.

The lighthearted moments were, however, overshadowed by the deep sense of urgency as emphasis was made that "crowds nice but votes nicer".

From councillor caretakers to brand-name speakers, the message was the same - voter turnout is key to an election victory.

"On election day, run go for your mother and your father," chanted an area speaker.

Another declared: "A numbers win election."

He charged that the crowds at People's National Party (PNP) rallies were transported.

"Them just trying to psyche you out in the belief that them have big crowds, but all dem doing is bussing people around," said the North East Manchester MP.

"They want to psyche out Labourites and the uncommitted who want to see a better Jamaica," he added.

"They must do better than that," he said, refering to a J$4-billion fiscal space created by a downward adjustment of the primary surplus target.

North Central Clarendon MP Pearnel Charles said: "I beg you tonight, go back home to Labourite who you vex with, tell them that they must vote because it's only the JLP can save this country."