On the corner: In Central Kingston, ballots not bullets 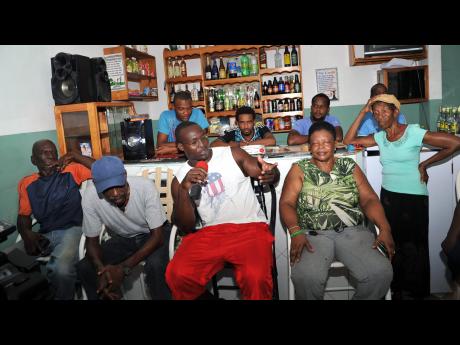 Norman Grindley
JLP supporters On The Corner on Gold Street in Kingston Central. 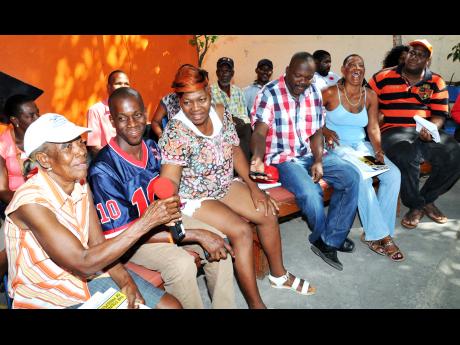 Norman Grindley
On The Corner in Kingston Central with PNP supporters last Monday. 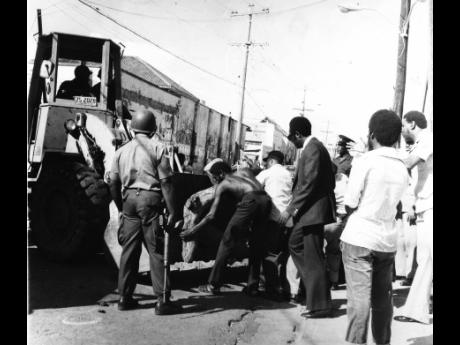 In this November 1980 file photo, then National Security Minister Winston Spaulding (third right) oversees the clearing of a road block on Gold Street in Central Kingston in the aftermath of the bloody general elections.
1
2
3

For decades, the constituency of Kingston Central has been a hotbed of political violence, with numerous bloody incidents, including the infamous 'Gold Street Massacre' on April 20,1980, in which five persons were killed and at least 12 others shot at a dance.

But over the past two election cycles, the violence has retreated and now residents on both sides of the political divide say they approach another election confident that the battle will be conducted with ballots and not bullets. They are determined to enjoy a

Supporters of both major political parties declared their commitment to peace when our news team went on the corner in the constituency last week.

People's National Party (PNP) supporters in Kingston Central are confident that good sense and years of education will be enough to dissuade party diehards from engaging in violent clashes during the general-election campaign.

"People are more educated now than before. They are realistic to politics, and they realise that the heads are not warring, so it don't make any sense that them on the flat warring," said Rozena Anglin, one of several PNP supporters who last Monday sat with our news team at the North Avenue constituency office of Member of Parliament Ronald Thwaites.

"What make the political violence cool down? It is because we are so intelligent," added an animated Joy Lee, who described herself as a "die-hearted" PNP supporter.

'We are not the war type; we have this ... our head, and that's where we are going to put the 'X' because we are intelligent. There is no dunce in the PNP," added Lee.

The Comrades have dark memories of supporters from both sides being beaten, killed and their houses torched during past election campaigns.

They also recall how many residents fled the area in order to escape the wrath of political enforcers.

An elderly PNP supporter, Yvonne Morgan, experienced the violence first-hand in the 1980s. Those days, she said, were much more violent than today.

"My mother in St Elizabeth had to come for my two sons to take them back to the country. She said that 'if anything, yuh don't affi run and look back; you just keep running'. And that is what happened," she said, the pain of the ordeal still vivid in the widening of her eyes.

"One of the reasons that we don't have wars with the other side is because we party together the last election," offered Richard Robinson, another PNP supporter.

"We socialise together and we even stand up on the corners together. The last election, we stood up on North Street right across from the Holy Trinity Cathedral in our party colours.

NO NEED FOR CONFLICT

"We don't see how we are going to fight each other over members who are friends inside Parliament. The only way forward is to unite," Robinson said, to nods of approval from other participants, including Raymond Munroe, who believes that respect for life and each other must be a priority during the election campaign.

"People are realising that we are one and that the leadership shows oneness. We are able to go anywhere in the constituency irrespective of the party we support," he said.

"This is coming from the head, and we view that as something. We are brothers and sisters. You can have a JLP and a PNP living in one house. A husband might be JLP, the wife might be PNP, but they are still living together."

In the meantime, Brian Richards and Errol Ennis praised the leadership of Ronald Thwaites, saying that he brings political maturity and order to the constituency, and that it will help to forge peace on both sides of the political demarcation.

Loyal Jamaica Labour Party (JLP) supporters in Kingston Central have accepted that the area is not as peaceful as they would like, but they say the bloodletting that sometimes occurs is not rooted in politics, and they do not foresee any political violence in the constituency this time around.

"The violence that flares up in the area has nothing to do with politics. It is about men who want to control turf. We don't really have political violence like that again," said former JLP councillor for the Rae Town division, Rosalie Hamilton, in whose mind the 1980 Gold Street Massacre remains etched and unforgiving.

"What the politics boils down to now is really money. There is not much loyalty to politics again. it's more about what you can offer them (gangsters). They see election coming up and they want MP (member of parliament) to come talk to them, so everybody a try look a way to hustle," continued Hamilton.

"But we [are] not seeing the wars over the politics like that in the community. Everybody is free to support who they want to support now," added Hamilton, who was among a group of JLP loyalists who gathered inside the Capricorn Sports Bar on Gold Street, metres from where gunmen, during the bloody 1980 election campaign, pounced early one Sunday morning, wildly spraying bullets at patrons.

Thirty years later, even while tension lingers in the constituency, which houses communities dubbed 'Spoilers', 'Southside', 'Tel-Aviv', and other volatile areas, the residents say they feel more empowered to cast their votes without fear for their lives.

"The violence is not really down, but it is not pushing up its head. In the last election, a lot of violence popped up, but they were independent, stemming from certain [criminal] allegiance that people have with each other, not politics," explained Orlando Walters.

"Some of the violence don't advertise and come over the media, so people think it is down, but you still have violence in some places."

Walters argued that Kingston Central is historically regarded as a People's National Party stronghold, and JLP supporters in the constituency are easier victims than attackers.

He wants peace initiatives on both sides of the political divide to maintain the lull.

"We have seen a decrease in political violence ... due to the fact that most of the persons realise that politics should not be justified through violence," offered Richard Green, who attributed the change to an increase in education over the years.

"People are more into patriotism to their party and less into violence. They are more informed, more educated, and more conscious of life."

Fellow Labourite Barbara Henry is praying for the best but preparing for the worst.

"The violence is on and off. There is mainly corner violence now, but no political violence as such. Or maybe it has started, but it hasn't flared up as much," she said.