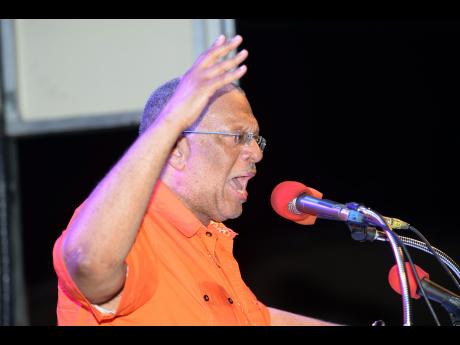 For the second consecutive week, Andrew Holness' house came in for special mention at a People's National Party (PNP) meeting.

As he did in Portmore, St Catherine, two Sundays ago, Dr Peter Phillips turned up in Black River, St Elizabeth, with a mission to put clear daylight between the leaders of both political parties: Portia Simpson Miller of the PNP and Holness of the Jamaica Labour Party (JLP).

The mansion being built in Beverly Hills, St Andrew, by Holness was once again thrown into the spotlight.

"We have a leader with a proven record. I say so and dem don't like it. We know what her values are. She has spent more than 40 years in the political vineyard working for the poor and the dispossessed of this country. Her mission is not to build nuh big house. Her mission is not to accumulate wealth for herself. Her mission is service of the people of Jamaica," Phillips, the PNP campaign director, said.

He told Comrades that Simpson Miller can be trusted, adding: "She is not new; she has been tried and tested by the people of Jamaica, over and over again."

Holness, who has referred to Simpson Miller as the grandmother of poverty, has been forced to defend the building of the house with a massive retaining wall in the upper St Andrew community.

The JLP leader said he and his wife, Juliet, a chartered accountant, has been saving to build the home for years.

Noticeably missing from Phillips' comment in Black River was his previous claim that the wall around the house costs billions of dollars.

Both Holness and Simpson Miller are career politicians. Holness entered Gordon House in 1997, three years after serving as executive director in the Voluntary Organisation for the Upliftment of Children (VOUCH) from 1994, and a year after he joined the Premium Group of Companies, where he was special assistant to former Prime Minister Edward Seaga.

Simpson Miller has been a parliamentarian since 1976, and before that, she served as a councillor for one term in the Kingston and St Andrew Corporation.