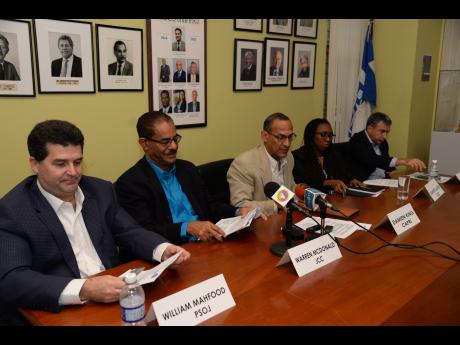 A COALITION of eight private-sector and civil-society groups is urging Prime Minister Portia Simpson Miller and Opposition Leader Andrew Holness to give their unwavering commitment to embracing what it describes as core principles of good governance from which present and future administrations should not veer.

In a letter to the political leaders, the coalition called on them to give the country an assurance that whoever hold the reins of power after the next general election will be wedded to five principles of good governance.

Dr Damien King, co-executive director of Caribbean Policy Research Institute (CaPRI), warned against the consequences of fiscal irresponsibility, which he said were public indebtedness and fiscal crises. His comments came yesterday at a press conference at the Private Sector Organisation of Jamaica's offices on Hope Road in St Andrew.

On the question of price stability, King said there was enough evidence to show that the poorest in society paid the most dearly for inflation. The group, therefore, wants deliberate policies aimed at ensuring low inflation.

Commenting on the need for a social safety net to protect the less fortunate, King said this was critical from a moral and humanitarian point of view.

Pushing for participatory governance and oversight committees to improve public administration, the CaPRI co-executive director said the ministries and agencies of the public sector did not have the capacity or knowledge to carry out their jobs and lacked the resources to produce good public policy and deliver effective public services.

He indicated that the increased collaboration among the Government, private sector, civil society and unions has manifested itself in the Economic Policy Oversight Committee (EPOC), the Energy Sector Enterprise Team (ESET), Partnership for Jamaica and the Rule of Law Committee.

In its letter to the two leaders, the group said: "It is obvious to us that this inclusive approach to governance has borne much fruit, and must not be threatened going forward."

It also wants the party that forms the next Government to create policies that facilitate the ease of doing business in Jamaica.

King said the coalition would be holding the Government accountable in the areas of governance outlined.

Warren McDonald, president of the Jamaica Chamber of Commerce (JCC), said for far too long, Jamaica had lived beyond its means, noting that there have been signs that corrective measures have been taken under the current International Monetary Fund (IMF) programme.

The JCC head said the coalition would be vigilant in its monitoring of the core areas of governance listed, to ensure that the sacrifices made by public-sector workers and Jamaicans under the IMF programme were not in vain.

PSOJ President William Mahfood said the collaborative approach to public-sector governance was bearing fruit through the EPOC and the ESET.

"It was important for us to say to both leaders that we feel that we have started on a path which is bearing fruit. It has effectively [shown], in a very short space of time, through even just the Electricity Sector Enterprise Team, that we can put in place the necessary effect of having successful committees to determine what the generating needs of the country are."

Jeanette Calder, member of the Jamaica Civil Society Coalition, said unless there was proper oversight and the holding of public-sector officials to account for their decisions, the country would not achieve its targets.

"It is wicked to not hold public officials and ourselves accountable because the consequences of not doing that are dire."