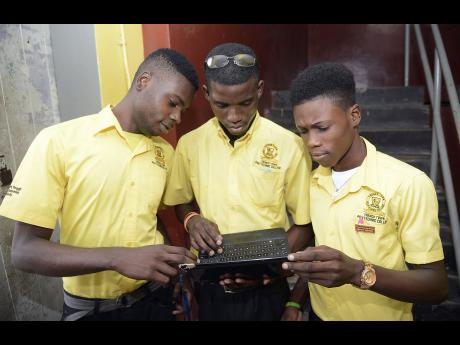 Three of the young men who are enrolled at the Trench Town Polytechnic College found something interesting on the Internet to discuss.

But now, inside the South St Andrew community of Arnett Gardens, where many have been killed or have killed their peers, an institute has been established that could 'bail out our boys' and save them from a life of crime.

The Trench Town Polytechnic College was officially opened last week and currently has more boys than girls enrolled, and the boys are loving the second chance at making a life for themselves away from the gangs and gangsters who populate so many of the inner-city communities across the island.

Veteran educator and principal of the college, Dosseth Edwards-Watson, understands the importance of an institution like this to bail out our boys.

"Quite often, we would say that the boys are not achieving at school, but I think that it could be that we are preparing them for unemployment, so to speak, and we are not engaging them in ways that they learn best," said Edwards-Watson.

And the boys, some of whom were on a road that would lead to prison at best or the morgue at worst, are grabbing this second chance.

"Me a go tell you the truth. When I used to go to Charlie Smith, I used to waste my time, but now I get back a chance to come and learn a skill," 19-year-old Shakeen Cooper told The Sunday Gleaner.

For 20-year-old Romario Mair, this is a godsend. "Unfortunately, there was a point when my life felt like it was going down, but I still fight it," said Mair.