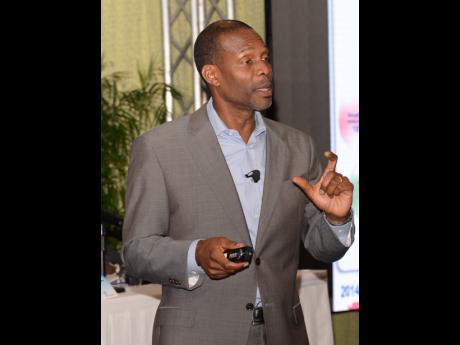 One month after the Office of Utilities Regulation (OUR) instructed telecommunications giant FLOW to remedy a slew of problems facing its customers, Garry Sinclair, the company's managing director, has announced that every effort is being made to comply and some improvement should already be visible.

Sinclair has also rubbished the claims that the problems are linked to the recent merger of FLOW and LIME.

"At the end of the day, people are going to complain. That's the telecommunication business that we are in, and I think customers are willing to accept that. But when there is an issue, the customer wants to be able to reach somebody quickly and have the issue resolved quickly. That is what we are working on.

"What I promise you is that we are going to accomplish those two critical tasks in a way that is not just acceptable to customers but in a way that will make customers incredibly pleased. If you give me until the end of March (2016) everything is going to be in place," added Sinclair.

Last month, the OUR summoned executives of FLOW after the utilities regulator recorded a 74 per cent increase in the number of service disruption complaints reaching its office.

The OUR reported that between January and September it received 400 contacts from FLOW customers, most of which were from LIME mobile customers concerned about problematic mobile, Internet and landline services as well as broadband services.

Some complaints surrounded the overall poor quality of service, service disruptions, dropped calls, disputed charges and billing matters, with some members of the public linking the service disruptions to the preparations before and just after the merger of the former rivals in August.

"The OUR in announcing the increase in complaints was a little sensational, we thought. The 74 per cent increase was higher than the actual number of the increase, which was about 60 people," said Sinclair, noting that since this year FLOW has added more than 100,000 new subscribers.

"Instead of saying that 60 more people complain, the OUR announced a big 74 per cent, making it look like the service is going to hell in a hand basket, when nothing could be further from the truth," added Sinclair as he declared that FLOW and the OUR maintain a fruitful relationship despite the differences.

Sinclair blamed unreliable power supply from the Jamaica Public Service (JPS) as the main cause of service disruption.

He said this was compounded by theft and vandalism, increased growth in the number of customers and a dearth of customer education.

According to Sinclair, some customers opt for cheaper Internet plans which may not necessarily fit the volume of work that they and relatives plan to do on their Internet.

He said some of the initiatives implemented to rectify the problems include the installation of copper-based Internet and phone capabilities, the in-sourcing of technicians and emergency crew to respond more quickly to failures, and the improvement of in-store service and bill payment options.

The FLOW boss said the company has also increases the number of customer service representatives in stores to deal with complaints, especially during the Christmas season.

Sinclair said FLOW is also planning the construction of a state-of-the-art customer care centre, which will provide some 350 new jobs for local customer service representatives.