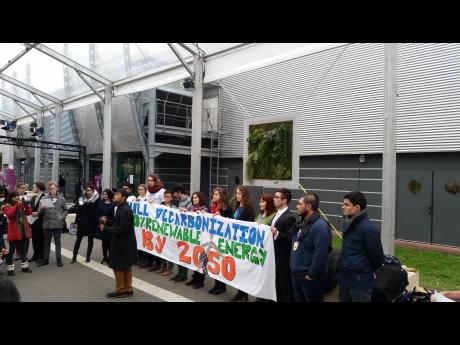 Petre Williams-Raynor
A group of youths protest along a walkway of the Paris climate talks venue yesterday. 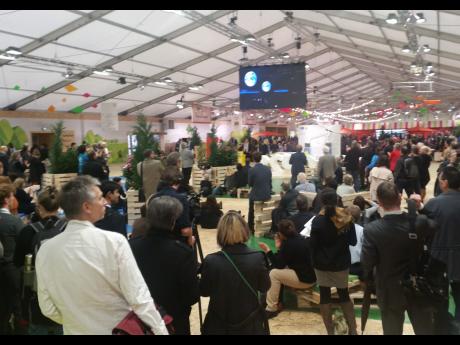 Petre Williams-Raynor
Participants at the climate talks in Paris are tuned in to the presentation from climate champion and former US vice president Al Gore, during his presentation yesterday.
1
2

Jamaica is looking to take a page from Seychelles' book, following that country's recent debt restructuring for climate-change adaptation with a number of its creditors, announced here on Monday.

"We have expressed our interest in pursuing another debt-swap arrangement with our funders, and this time, we are looking at it in relation to climate-change adaptation and mitigation," revealed Col Oral Khan, chief technical director in the Ministry of Water, Land, Environment and Climate Change.

"We have had experience with debt swaps in the past, where we were able to use funds that would have gone to debt repayment to invest in our forests and also to help community groups and NGOs which had projects that could advance the environment," he added.

That previous arrangement financed the work of the Environmental Foundation of Jamaica, through an agreement between the governments of Jamaica and the United States. It was designed to foster natural resources conservation and child development locally.

So far, Khan said, the signs are encouraging for the island, which has grappled with a heavy debt burden, while counted among those most vulnerable to climate-change impacts.

"Now we are hoping we can apply some of our debt-service payments to our adaptation and mitigation, and we find that some of the lenders are warming to the idea," he told The Gleaner.

"Yesterday (Monday), the Republic of the Seychelles launched the first debt-swap arrangement in relation to climate-change adaptation and mitigation, and we were there to endorse and to express our own interest in similar types of debt swaps," Khan added.

Already, he said, discussions involving his ministry and the Ministry of Finance and Planning were under way on the matter.

"We are going to push ahead now that we know there is a warm response to this. We need to be able to put more funds into adaptation, but because we have to spend so much money on debt repayment, then the funds left for development and for adaptation are curtailed," Khan remarked.

The size of Jamaica's debt stands at some J$2 trillion, with a debt-to-GDP ratio of 130 per cent.

Meanwhile, the chief technical director, who is a member of the Jamaica delegation to the Paris talks, indicated that he anticipated very little difficulty in making the debt swap a reality for the country.

"We have a framework in place already. That would make it fairly easy for us. We know what we want and what would go into this type of arrangement. It would just be to engage the financiers now," he said.

The Seychelles arrangement - undertaken with creditors from The Paris Club and the South African government - makes "the cash flow from the restructured debt ... payable to, and managed by, an independent, nationally based, public-private trust fund called the Seychelles Conservation and Climate Adaptation Trust (SeyCCAT)," according to an article from blueandgreentomorrow.com.

"Debt-service payments fund three distinct streams: one for work on the ground that will help reduce risk through improved management of coasts, coral reefs, and mangroves, another to repay impact investors, and a third to capitalise SeyCCAT's endowment," it added.