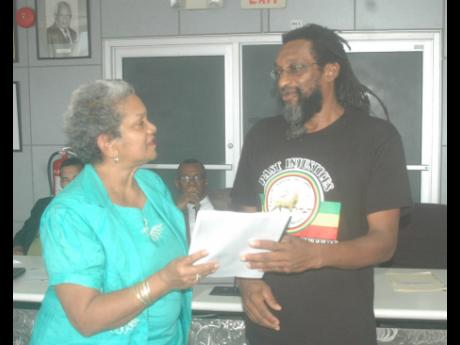 After years of agitation, the local Rastafarian community has finally got an official acknowledgment, through an investigation conducted by the Office of the Public Defender, that its adherents were unjustly treated in the 1963 Coral Gardens incident in Montego Bay, St James.

In outlining the contents of the report, which was unveiled during yesterday's monthly meeting of the St James Parish Council, Public Defender Arlene Harrison Henry said the Rastafarians were subjected to "discrimination, denigration and scorn", and called for an apology and compensation to those who suffered unjustly.

" ... What our investigations found is that many Rastafarians - some of whom were not taken into custody - certainly had to trim their dreadlocks and their beards so as to avoid being taken into custody and to avoid prosecution," said Harrison Henry.

The 1963 incident reportedly stemmed from an old incident in which a Rastafarian sympathiser, Rudolf Franklin, was shot and seriously injured by a property owner in a dispute over lands. Franklin and others decided to exact revenge by burning down a gas station. That incident caused a massive state crackdown against Rastafarians.

In addition to the apology, the public defender said her office is also recommending that the ministries responsible for culture and tourism establish a centre specifically for the development and preservation of Rastafari culture.

"We consider that there would be need for a specific space ... . We are recommending that serious consideration be given to the acquisition of the Outameni property for a part of it to be allocated for the purpose of developing this cultural space ... and that financial, technical and legal resources be provided to the Rastafari community for the purpose of organising a cooperative society exclusively for the Rastafari community."

While not placing great emphasis on individual compensation for survivors of what the Rastafarians have dubbed the 'Bad Friday Massacre', the public defender called for the establishment of a trust fund to benefit surviving victims.

" ... We are recommending the establishment of a trust fund of approximately $10 million, where persons who are properly identified to be surviving victims can be provided for," the public defender said.

"We also want the State to consider granting a licence to the cooperate society, once established, for the growing of ganja in order to supply institutions legitimately involved in scientific research on the plant and legitimate users/consumers - local and overseas - if and when it becomes legalised."

"We are very pleased, but we see this only as an important first step ... . We are now waiting to see what the Parliament will do when they get this report," said Ika Tafara, a member of the Rastafari Coral Gardens Committee.

"We believe the Government needs to come up with an adequate compensation package to take care of those survivors who are still here with us and need to be cared for."