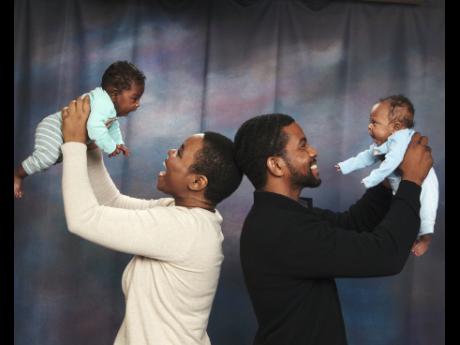 Contributed
Supermom Taneshia Stoddart-Kerr and husband Timahaya with their twins who both weighed just over one and a half pound when they were born premature. 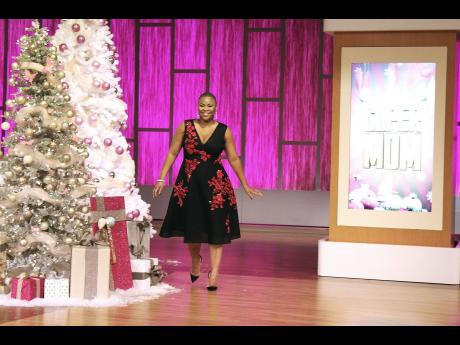 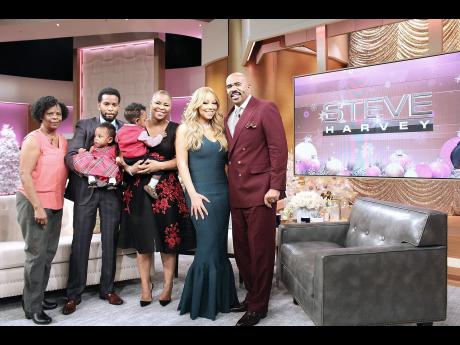 Contributed
Taneshia Stoddart-Kerr (centre), husband Timahaya (2nd left) and her mom, when they appeared on the Steve Harvey (right) Show with singer Mariah Carey and their pre-mature twins Asher and Achsah
1
2
3

After multiple miscarriages, doctors had given up on Jamaica-born Adventist pastor Taneshia Stoddart-Kerr ever bearing children.

However, this woman of big faith never giving up, particularly after finally giving birth to micro premature twins, Asher and Achsah, for her husband, Timahaya Stoddart-Kerr,

The two, a boy and a girl, each weighed no more than one and a half pounds, which meant they had to live in Intensive Care Unit (ICU) at the Fresno Community Regional Hospital in Central California until their lungs, brain, etc, were developed.

Even after they were discharged from the hospital, which has a Level 3 ICU, one of the best in the country, the babies' lungs were still not fully developed and the parents had to move to Chester, Virginia, because the air quality was better there.

"The doctors prepared the babies for early delivery because they knew I wasn't going to term. They gave them medication to protect their brains from bleeding, and also accelerate the development of their lungs," Stoddart-Kerr, a CARIMAC graduate, told The Sunday Gleaner.

The road to delivery was extremely rocky, and this was evident when Stoddart-Kerr started having contractions as early as 20 weeks into her pregnancy. The doctors were able to control the contractions and delay the delivery. But the babies still came 14 weeks premature, when her water broke and one of her sons was breech.

Faced with astronomical medical bills and almost a life in neonatal ICU, the mother of two, who hails from Anchovy, St James, stopped going to the hairdresser's; instead, she chopped off her sister locks, resigned her job as a full-time pastor, sacrificing everything outside of keeping her children alive.

"I had no time to do my hair. Maintaining the locks and taking care of it became a challenge. When my daughter had her second surgery, I realised I had to make a choice, I had to do something to free up my time so I could focus on both of them," she told The Sunday Gleaner.

Her hair had grown past her shoulders and the locks were a personal gift to herself when she turned 28. She is now 35.

"I went to the barber and told him take it all off. He said short, and I said no, all off." A decision that she says wasn't hard to make. "I couldn't think about myself at that time. It was harder for my family to accept."

For Stoddart-Kerr, making the sacrifice to ensure her children remained alive came naturally. The road was rough, she reminisces in a book she has since written, titled Under Qualified and Overwhelmed, taking prospective parents on her journey.

That journey includes sleeping on the floor with the twins every night, ultimately giving them CPR to save their lives, after they were released from hospital care.

"When you find yourself in that position, where there are two lives that are completely dependent on you, you have to reach within yourself for something that you never thought you had.

"When you are stretched beyond your ability to hold on, where do you find the faith, the strength and courage to face one more day? It's hard to put into words the absolute fear and the depth of guilt that goes through a mother who experiences this," said Stoddart-Kerr.

Over the next few months, she said she felt deep anger whenever someone told her congratulations, and her heart still mourned the loss of her third trimester.

"But there was no time to grieve my pain," she revealed.

For her husband Tim, a truck driver, who was born in Moy Hall, St James, his wife was a supermom of all supermoms for making the type of sacrifices she made, even while enduring the pain.

"My wife doesn't think anything of the sacrifices that she has made. I am just blown away by how selfless she is," he told Harvey two weeks ago during the segment which was shown on a CBS local network.

So impressed was Harvey with the sacrifices Stoddart-Kerr had made, he invited another mother of twins, superstar Mariah Carey, to appear on the show to surprise her. She was brought to tears when Carey appeared and gave her a hug. Stoddart-Kerr was further shocked when Carey gave her a makeover, courtesy of her own personal glam squad.

Her biggest surprise came when Harvey gave her US$10,000 on behalf of Green Dot, to help with medical bills, and said he'd send them on a five-day, four-night stay to Jamaica, so that the twins could meet members of the extended family for the first time.

As excited as the 35-year-old mother is about being recognised, she doesn't feel she has done more than her husband has done.

"He has been very supportive and understood more than anyone else the challenges we were going though," she stated as she declared that he made sacrifices as well.

"He is a truck driver and when the medical bills started piling up, he sacrificed not being home with us by the taking a long-haul trucking job because it paid better. He was gone more often, but we were able to stay on top of our bills."

Stoddart-Kerr says the title of her book reflects the feelings she had navigating her experience of giving birth to micro premature twins while serving as a full-time pastor in Central California.

"I share what my family and I learnt about faith, family and depending on God during our journey in the NICU (Neonatal Intensive Care Unit). My hope is to provide resources to

help others cope and stay encouraged during their own storm. Under Qualified and Overwhelmed is for anyone who feels burnt out or challenged by the complexities of our 21st-century world."

She said the growing needs of the twins have recently pulled her away from full-time ministry. She now dedicates her time to being a mom, writing and occasionally speaking.

Asher (meaning I am happy for God has blessed me) and Achsah (my crowning work), whose names came straight out of the Bible, are now 19 months old, each weighing 20 pounds.