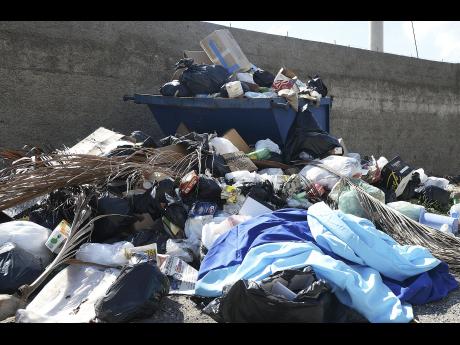 Ian Allen
Uncollected garbage in Calabar Mews has residents concerned over the possible return of the rats that infested the area in recent times.

Nearly four years after the community was overwhelmed by a severe rodent infestation, residents of Calabar Mews in St Andrew are again expressing fears that huge rats are being lured back in the community to wreak havoc on their lives.

It was in early 2012 that the neighbouring Calabar High School faced a severe test as rodent overran the area in which the institution is located.

Now, residents are again calling for help. They complained that a huge pile-up of garbage disposed of by residents of neighbouring Plantation Springs has become a nightmare.

"The garbage is not being collected regularly and it is spilling over on us here," said Eileen McLaughlin, an elderly resident of Calabar Mews.

"Some time ago, we had a terrible rat infestation, and two weeks before Christmas, no garbage has been collected up to now, so this is our concern," she added. "We don't want the infestation of the rats to start up back on us."

McLaughlin was supported by another resident, Charmaine Rattray, who declared that something has to give before the rodents return.

With the garbage skip at the Calabar Mews itself posing no such problems, chief executive officer of the National Solid Waste Management Authority (NSWMA), Dennis Chung, was contacted.

He told The Gleaner that while the agency collects the refuse in Calabar Mews, there are indications that Plantation Springs is not registered with the Kingston and St Andrew Corporation (KSAC). That prevents it from collecting from Plantation Springs.

"The process is that the complex would register with KSAC and then get on the property tax roll," said Chung.

He said once that is done, the KSAC would write to the NSWMA to add them to the garbage-collection schedule.

"They could call NSWMA and see if they are in the schedule, and if they have received the letter from KSAC," he said. "Sometimes the developers or the strata management don't take the appropriate action."

He suggested that Plantation Springs is likely to have a contract with a private firm and may not be fully registered as yet.

"They need to register the complex at KSAC," he stressed.

Some residents yesterday summoned The Gleaner to a fly-infested area of the community, where the pile-up was nearly has high as the tall periphery wall bordering the area from Red Hills Road.

But within an hour of the visit, The Gleaner was informed that the area was hastily cleared.

For the residents, however, this knee-jerk reaction is not good enough.

The Plantation Springs housing complex, located at the entrance to the Red Hills Road-based Calabar Mews, is like a community within a community.

Although the offending area was loaded with refuse, residents of Calabar Mews brought to the attention of The Gleaner other sets of garbage-disposal units in other areas that were empty and devoid of pests.

The residents appeared to be at pains to point out that the disposal sites that they used were empty as they are cleaned by the NSWMA on a timely basis.