Job letters for JLP Ministers ... there'll be consequences for failure 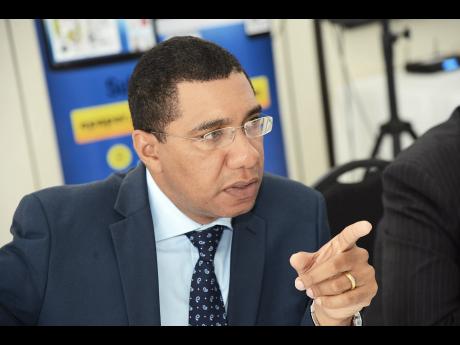 Leader of the Jamaica Labour Party (JLP) Andrew Holness has promised to issue job letters to members of his Cabinet to ensure that high-level performance is maintained if the organisation is victorious in the impending polls.

"All ministers under the new Jamaica Labour Party will be given a job letter," declared Holness yesterday at a Gleaner-Mona School of Business and Management Leadership Roundtable.

Holness warned that there would be "consequences" for failing ministers.

Responding to queries from a team of Gleaner journalists, Holness was quick to brush aside queries that presigned, undated letters would be forthcoming as well.

This was spurred by his legal loss in the Constitutional court last year that returned two estranged senators - Dr Christopher Tufton and Arthur Williams - who had been booted, back in to the Upper Parliamentary chamber.

Holness rushed to give the assurance after being quizzed.

"That job letter has a timeline of two years and six months from the date of their appointment with key performance targets, which are agreed upon by the Cabinet," he said.

Several ministers in the Portia Simpson Miller-led administration have been accused of negligence or dereliction of duty.

Numbered among perceived negligence or dereliction of duty, in which suspected recalcitrant public officials have reportedly been "let off the hook", is the 'Outameni Scandal', which featured the Simpson Miller-led Office of the Prime Minister.

The deal involved a transaction in which a private property was acquired by the National Housing Trust under controversial circumstances.

Then there was former Health Minister Dr Fenton Ferguson, who was featured prominently in the so-called 'Dead Baby Scandal' and the chikungunia row before he was transferred to the Ministry of Labour and Social Security.

State Minister in the Ministry of Transport and Works Richard Azan was returned to his position after the Office of the Director of Public Prosecutions, dismissed the charges against him in the Spalding Market imbroglio.

Local Government Minister Noel Arscott is still in the Cabinet after the smoke cleared at the Riverton City landfill. The inferno left citizens scrambling for medical treatment last year.

"Everything that they do must lead towards economic growth and job creation," he said. "Failure to achieve those specific targets within the period is consequential," he warned.

Holness disclosed that Cabinet members would also be the recipients of a 90-day target in the first instant.

He said the first 90-day target constitutes "low-hanging changes that can be made. "All of that is aligned to our manifesto," he said.

Audley Shaw, the opposition spokesman on finance, disclosed that the party's manifesto is to be released shortly.

General Secretary of the JLP Dr Horace Chang told The Gleaner recently that the manifesto would be released incrementally.