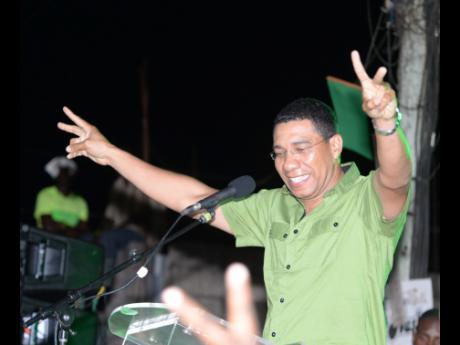 Should the Jamaica Labour Party (JLP) emerge victorious in the upcoming general election, Opposition Leader Andrew Holness intends to make a number of legislative changes to include term limits for prime ministers and a fixed date for general elections, among other things.

Speaking during Sunday night's mass meeting at Sam Sharpe Square in Montego Bay, St James, Holness said he intended to put some of his ambitious plans into motion in his first 100 days in office.

He also noted that he hoped to have a referendum on the Caribbean Court of Justice (CCJ) and the buggery law.

"Within our first 100 days of government, we will start the legislative process to fix the date for general elections in Jamaica. This will bring greater certainty to the political process, and, by the way, the date will be a date after the Budget, and not before," said Holness.

"So no government will be able to come and make false promises and hide the truth and tell you half-truths, and trick you into voting for them, and then when they win, they draw poison on you."

On the matter of integrity in the Jamaican legislature, Holness said he would also be looking at introducing impeachment proceedings in Parliament.

"Within the first 100 days of our government, we will start the legislative process to institute impeachment proceedings in Parliament. This will add another layer of protection of the Parliament to ensure that only members of unquestioned integrity sit in the Parliament."

In regards to ongoing calls for term limits for prime ministers, Holness said he intends to answer in the affirmative as part of his first 100-day agenda.

"Within the first 100 days of government, we will start the legislative process to introduce term limits on the office of prime minister," said Holness, who previously served two months as prime minister of Jamaica.

In noting that there are many forces pulling at the value systems of Jamaica, Holness said efforts are being made to "change the very foundation, the definition and fabric of Jamaica. The only way to resolve these issues is to have you, the people, say what you want.

"At a convenient time within our new government, we will hold a grand referendum on the Caribbean Court of Justice as the final appellate court. We will also place on that referendum the removal of the buggery law," said the opposition leader.

On the worrying matter of voter apathy, Holness made a special appeal to the uncommitted, saying the upcoming election presents an ideal opportunity for persons who are turned off by politics to get on board and become part of the change he wants to bring to governance.

"It is inevitable, it must happen that leadership in Jamaica must change, so why not let it happen now? Why not take that chance now?" asked Holness.

Holness also spoke to his party's 10-point plan, which he said would address issues such as tax reform, growth, investment and job creation, among others.

He said contrary to what his critics were saying, it was a well-thought-out plan, which he is confident would bring success to Jamaica.

It was while outlining the virtues of his plans that gunshots rang out in Sam Sharpe Square, bringing a premature end to Holness' presentation. Three persons were shot and killed in what the police said was a face-off between rival gangs from the Flanker community in Montego Bay.