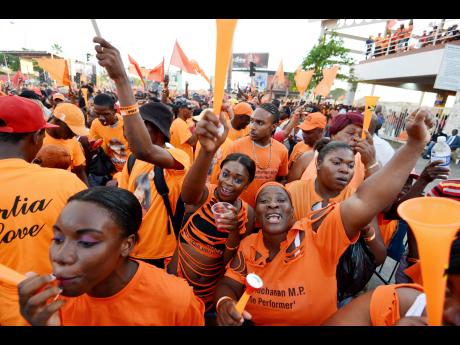 File
People's National Party supporters in a jubilant mood at a mass rally in Half-Way Tree, St Andrew, in January. 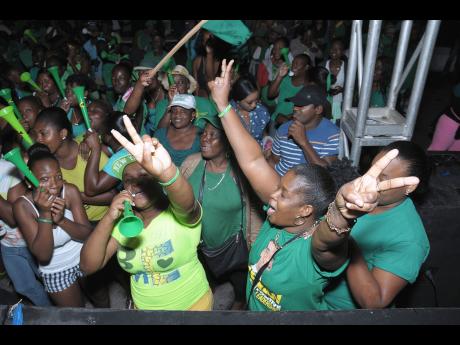 Gladstone Taylor
Jamaica Labour Party supporters out in their numbers for a rally in Richmond, St Mary.
1
2

After an eventful political campaign that intensified over the last two weeks, an epic electoral contest looms large today on the country's colourful political landscape.

As the Electoral Office of Jamaica (EOJ) pronounced its readiness, the much-anticipated showdown between the People's National Party (PNP) and the Jamaica Labour Party (JLP) is rushing to its climax.

With both major parties in a statistical dead heat, anticipation is high as Jamaicans head to voting booths across the island.

Of the 152 candidates nominated in the 63 constituencies across the island, 126 are standard-bearers of the island's two major political parties. The PNP and JLP have each fielded 63 candidates, while the remaining 26 candidates are either representing the National Democratic Movement or are independents.

Recent polls have telegraphed that the JLP has been bearing down on the PNP in what is expected to be a supreme dash to the finish line.

The Gleaner-commissioned Bill Johnson polls have shown that the JLP is making inroads on the PNP, with several marginal seats being held by the PNP moving in the direction of the JLP.

Such is the level of confidence from Old Hope and Belmont roads that senior functionaries on both sides of the political divide are already claiming victory.

"From where we are, everything is in place," he told The Gleaner.

Although the result of Monday's votes by police, soldiers and election-day workers are yet to be released, Burke is already counting the ballots in the PNP's favour and he is adamant that he is not premature.

Confidence has also been spewing from the rival party.

"We are doing exceptionally and will win the election," declared Holness.

"If you, for just a moment, step back and think what was being said about our chances nine months ago, to what is being said now, we have, within that period, come a long way," he asserted.

Both parties have served notice that they are on the lookout for electoral shenanigans designed to mar election-day activities.

Burke told The Gleaner that indoor and outdoor agents representing the PNP have been alerted.

"We have warned our workers to look out for fraudulent identification cards and they will be vigilant," he said.

JLP functionaries have also chorused soundings about the likelihood of underhanded tactics.

"The Jamaica Labour Party's accusations that the PNP is planning to disrupt the elections scheduled for February 25 are disingenuous and mischievous," said PNP campaign spokes-person Delano Franklyn.