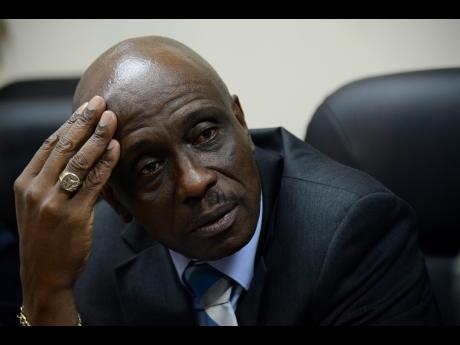 To compound the matter, Fisher is among six senior managers at the EOJ's head office in downtown Kingston and 14 constituency managers who are either past retirement age or qualify for the Government's early retirement offer to civil servants.

The uncertainty has caused the Jamaica Civil Service Association (JCSA) to zoom in on activities there.

JCSA President O'Neil Grant told The Sunday Gleaner that it was alerted by its membership of "negative workplace tension" at EOJ.

"We were preparing ourselves to weigh in on the issue of the renewal of his (Fisher) contract but when we recognised that it is in the courts, we decided to await that decision before offering any comment," said Grant.

He added that the JCSA "has been told by our membership that they stand in support of the appointment of Mr Fisher, and once the members take a stance, the union usually supports its membership."

According to Grant: "They have told us that they are seeing danger in how the head is being treated and that could eventually trickle down to them, because we have heard in the past of persons demanding the transfer of public officers, because they are perceived to be on some political side or the other."

He pointed to reports in the wider public service of demands being made by elected representatives about how public servants voted.

"This is scary. And I know that the information contained within the EOJ does not allow for anybody to identify how individuals voted.

"We don't know where it is coming from, or how it has happened. But we do recognise that there has been some attacks on the systems of the office from time to time," charged Grant.

That was supported by a Sunday Gleaner source who said that political hacks have taken aim at the EOJ.

"I have been there for years and the level of politics I am witnessing is unprecedented. So a lot of people just want to pack up and go, for some of the persons involved are 'children' to the people they want to tell what to do, and how to do their jobs," said the EOJ source.

He pointed to the seamless transition at the office when then Director of Elections Danville Walker left in 2008, and argued that was possible due to the presence of senior managers with years of experience who allowed the electoral process to continue without a glitch.

According to the source, the EOJ, like the Jamaica Constabulary Force, should "not be put into a period of needless confusion over its leadership, as proper planning could avert this".

Grant agreed that there is no need for the current climate of hostility at the EOJ.

"The attack on the systems of the EOJ is now pointing to persons within the office being targeted for removal to be replaced with persons you don't know, and these are cause for concerns. As independent public officers, we ought not to be subjected to the whim and fancy of politicians," said Grant.

"We do have real concerns and we will do everything to ensure that the interests of our members are protected," added Grant.

Fisher, who has headed the electoral body for the last eight years while presiding over two legislative and two municipal elections, and a number of by-elections, will know on February 24 if the court rules in his favour in his battle with the ECJ, which has decided not to offer him a new contract.

Should the court rule against Fisher, an acting director could be installed to oversee the March 5 by-election in St Andrew North Western.