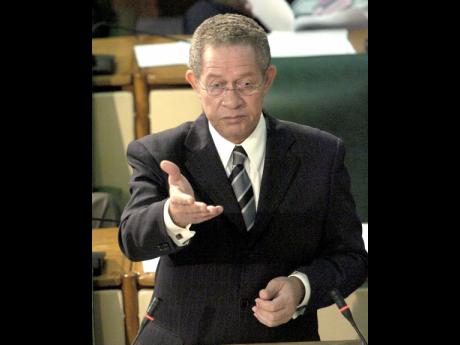 "Uncharted waters" - that is how former Prime Minister Bruce Golding has described the potential one-seat majority an Andrew Holness-led Government could have when the new Parliament is constituted.

Official recounts have accorded an additional seat to the People's National Party (PNP) after the Jamaica Labour Party (JLP) emerged as the victor in last week's general election.

When ballots were counted on election night, 33 seats were declared for the JLP and 30 for the PNP.

The JLP's majority was on Saturday clipped after Director of Elections Orrette Fisher indicated that the People's National Party's Winston Green had won the St Mary South East seat.

With recounts likely to continue into this week, the seat may be subject to a magisterial recount, which could return the JLP's 33-seat majority.

Notwithstanding the decision of a magisterial recount, Golding said that the slim majority of the government-in-waiting would make governance difficult.

"We have never had this kind of situation, so in a sense, it is uncharted waters, but it is not unchartable waters," he told The Gleaner.

According to Golding, "It is going to be challenging for the prime minister and the Government, but there is precedence for it in the Caribbean."

He pointed out that other countries across the region have successfully contended with ruling parties that have had to govern with a slim majority.

After the December 9 election in St Vincent and the Grenadines last year, the Ralph Gonsalves-led Unity Labour Party won a historic fourth consecutive term with a one-seat majority.

The 2003 election in Grenada returned The New National Party government of Prime Minister Keith Mitchell to a third consecutive term, also with a one-seat majority.

Should the one-seat majority for the JLP be maintained, Golding says that extraordinary leadership and discipline will have to be displayed by the ruling party.

"What it means is that Mr Holness is going to have to be very deliberate in his choice of Speaker (of the House of Representatives) because any contentious issue is going to ultimately be determined by the Speaker's vote ... . It means that all members will have to be present for every session of Parliament," he said.

In respect of the Speaker's role in a Parliament with a slim majority, constitutional lawyer Dr Lloyd Barnett has pointed out that parliamentary rules dictate that the Speaker is allowed to cast a vote when there is equality of votes.

"The voting rules don't change because of the numbers that each party has. The rule is that the votes are taken, and if there is an equality of votes, then the Speaker has a casting vote," he explained.