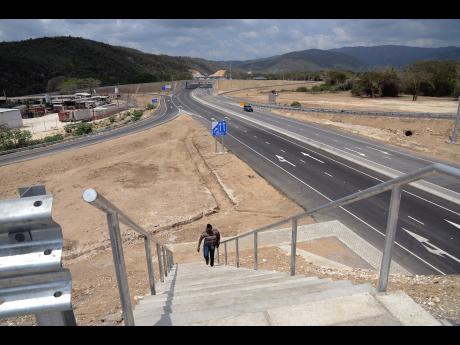 Norman Grindley
The hastily constructed flight of 48 steps that old, young and overburdened have to ascend and descend daily to catch buses and taxis along the busy Mandela Highway. 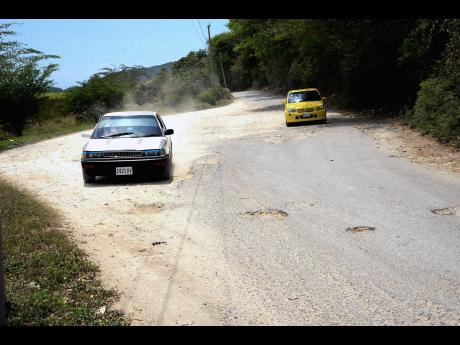 Norman Grindley
One of five sections along the Caymanas Bay main road where these two motorists had to carefully choose the smoothest patches on which to drive when The Gleaner visited the area yesterday. 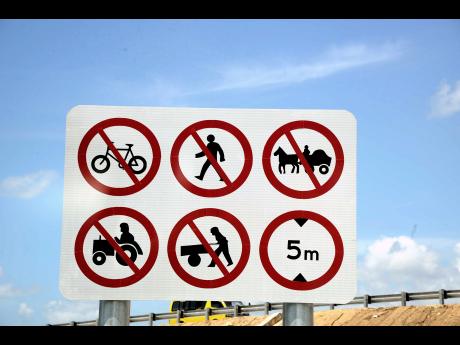 Norman Grindley
The sign at the intersection of Mandela Highway and the entry to Caymanas Bay and Caymanas Glade shows what is not to be done, but most of the residents have to walk at least a part of their journey.
1
2
3

The newly reconfigured road network leading from Mandela Highway into the communities of Caymanas Country Club Estate, Caymanas Bay, and Caymanas Glade in St Catherine has made it difficult for pedestrians who live in the latter two communities to get to and from their homes.

For starters, the new and narrow roads leading off the badly damaged main road to these communities are very dangerous.

The main road to Caymanas Bay has been badly damaged since Hurricane Dean "mashed it up", a group of six young men repairing a car in the community told The Gleaner yesterday morning. That, coupled with the lack of piped water, accounts for why one member of the group said he did not vote in last month's election. Residents use creative means such as pumping water from the river nearby to their homes.

But, along one section of about half-mile, motorists were seen deftly negotiating five smooth marl patches. And on the Mandela Highway, one resident from Glade breathed heavily after ascending the 48 steps. She told The Gleaner that the steps were only erected after residents met with political representatives and complained in the lead-up to the recent general election.

"They built the steps without any consideration given to us - and the rails came two weeks later," said Novelette Burke, who was on her way to work along Spanish Town Road.

She climbed the steps to get a bus along the very busy highway from below the bridge where the taxi had left her. She also said that when it is too much for persons with loads, or for the elderly, they charter the taxi to White Marl where the conditions are flatter and safer. But then the usual $100 fare costs $600. Some drivers refuse to stop citing the rules of the road which specify no stopping along a highway.

So potentially dangerous is the stretch that a sign below clearly cautions against walking, pushing horse-drawn carts, riding bicycles, or pushing wheelbarrows in the area. For motorists from the area, it means leaving home extra early if they want to access the Mandela Highway, as there is no filter light. "Motorists will not let us out at all; we have to wait for several minutes, and that causes a build-up of traffic anywhere between 6:45 and 7 a.m.," said one woman who has had to make the adjustment.

There are fears that in the event of an emergency, motorists will be stuck in traffic.

But what seems to be lurking in the minds of a few is the possibility of flooding when there are heavy rains which have not yet fallen to test the resilience of the drains along the new highway, or Mother Nature's answer to forested areas now left bare.