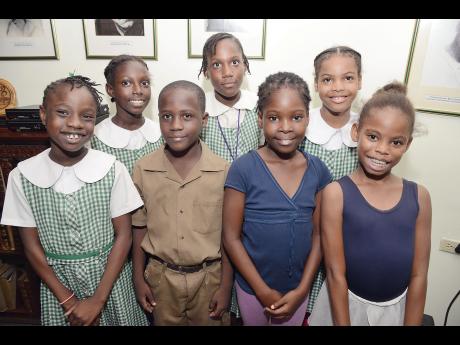 Rudolph Brown
The group of children with whom The Gleaner spoke at the Junior Centre, Institute of Jamaica, ahead of Child Month. They are (from left) Rayanna Williams, Robertha Russell, Omario Campbell, Brittany Houston, Toi Williams, Alyssa Johnson and Kelsey Pitter-Clarke.

Children can say some of the most amazing things when asked the right questions and given an opportunity to fully express themselves.

As Child Month is celebrated throughout May, The Gleaner sat with selected children to hear their voices on the issues that concern them.

Alyssa Johnson, an Institute of Jamaica (IOJ) Junior Centre participant, was adamant that she does not want the Chinese to take over Jamaica.

"It's our country and not theirs," she said while speaking with The Gleaner at the IOJ council room.

Abijah Brown, who was also taking part in the discussions, focused on the issue of human trafficking.

"A lot of children are being sent away to work for other people, so if I was prime minister, I would put a stop to human trafficking. I would not let children go on WhatsApp and Facebook and those things, because when people want to meet them face to face, they see that they are little and they take them away," he said.

Abijah also put forward arguments for the removal of all tuition fees in schools and expressed concern about homes that are affected by landslides.

Picking up on the environmental concerns, Kayliah-Jayde Byfield of Wolmer's Prep spoke to the need for pollution to be addressed.

"We need to help Jamaica look more beautiful and deal with air pollution," she said while adding her voice to Gleaner discussions with Wolmer's Prep students.

Turning her attention to the issue of poverty, Roberta Russell of the Junior Centre said: "For the poor relief, I would want to see them build more homes for the poor people and get more jobs, so they can stop going on the road to beg, so that when they have jobs, they have their own money."

With the focus turning to the education sector, Brittany Houston said to her fellow Junior Centre participants: "For education, I think we need more teachers, because some teachers have to teach more than one class, and it's very stressing."

For her part, Rayanna Williams identified bullying as a serious issue within schools.

"I would like the bullies to stop, and all those children who like to curse and fight other children, they need to stop. We must allow students to be smart and wise so they don't allow anyone to tell them what to do when they know it is wrong," she said.

Garbage collection was also high on the agenda for the children who sat with The Gleaner.

"We need more dumps, because people are throwing their garbage all over the place. Jamaica is too dirty, and we should clean it up. Even the beaches are dirty," Junior Centre participant Alyssa Johnson said.