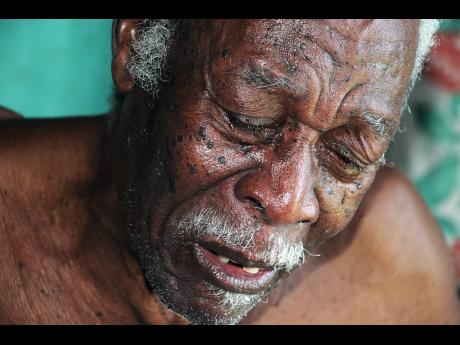 Jermaine Barnaby
Neville Williams burst into tears while speaking about the good the missionaries did for him as a blind man.

Neville Williams' Sunday dinner was still sitting on the chest of drawers in the one-bedroom house he shares with his wife, Paulette Williams.

The 80-year-old, who has been blind since his early 40s, told The Gleaner yesterday that he lost his appetite when he heard of the deaths of American missionaries Harold Nichols and Randy Hentzel.

The news about Nichols was particularly hard for him to take as they had developed a unique friendship.

"Me get me dinner from about 3 o'clock and mi just couldn't eat it, see the food put down there. Every time mi go fi eat, mi just asking myself why they had to kill somebody who do so much things for people in the community," he said.

The Williamses are grateful beneficiaries of Nichols' kindness. 'Maas Harold', as Nichols was affectionately called in the Huddersfield, St Mary, community where he and his wife have lived for years, not only helped him to build his house but also effected repairs from time to time.

"He came by and say, 'Maas Neville, you know your house is getting bad,' and then I see him come one Saturday with some people and do all the necessary fixing," he explained.

Nichols' assistance extended beyond the repairs of the house. Williams wept freely as he recalled with fondness the many times he spent praying and conversing with the missionary. He told The Gleaner that Nichols visited him at least twice per month to ensure his stock of medication was refreshed and that he and his wife had food to eat.

"I have lost one of the most important persons in the world. He doesn't leave me out; ... he is just the kind of loving man to me ... . I don't know when I going to stop cry about that gentleman ... . A only my mother me miss so," he said.

Neville's wife, Paulette, said that the community of Huddersfield will not be the same without the missionary who had made it his second home.

Nichols was highly respected in the community.

"They respect that man so much; you would never believe he is not Jamaican. They respected him because he respects himself," Williams added.

For Williams, news of Nichols' death could not have come at a worse time, as he celebrated his 80th birthday last Tuesday and was expecting a visit from the missionary.

"When he visits me, he sings with me, prays with me and ensures I don't want for anything. I will never find that kind of love into a man, and he is a man of God ... . And they see him doing his missionary work and they kill him - why they do that? But God see and know," he said after a long period of silent sobbing.

Williams said he hoped that the criminals who killed the missionaries would be brought to justice.

"I wish the police find the culprit quick, quick, because you can't destroy Maas God children and think you a go get way. They didn't leave America to come and fool around; they did excellent work, and they get killed, both of them ... . No more Maas Harold for me," he said.