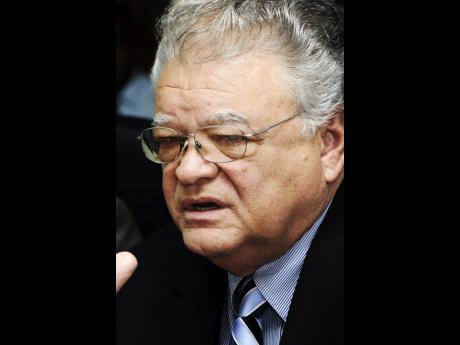 Karl Samuda, minister of industry, commerce, and agriculture, has promised to continue to assist the sugar sector but remains emphatic that the Government will not be a participant in the industry.

"Let me make it absolutely clear: the Government, of which I am a part, does not intend to go back into sugar production," said Samuda at this week's meeting of the Standing Committee of Parliament.

"But we have a responsibility to the expansion of that industry, which we regard as being essential in this country, creating jobs and foreign exchange," he added.

He continued: "We will stand ready, willing, and able to give our support to anyone in the industry who finds himself or herself in a difficult position such as was the case with Long Pond and now with Moneymusk."

The Government, in April, took over management of the operations at the Long Pond Sugar Factory in Trelawny for three months as part of plans to harvest 95,000 tonnes of cane that is yet to be reaped.

Samuda advised then that the principals of Everglades Farms Limited (EFL), who were slated to take over the operations, indicated that they were in no position to start up the factory because of their financial position.

According to Samuda, they further advised that they were prepared to "allow the Government to start up and operate the factory for three months, to take off the cane".

Earlier this year, Everglades Farms Limited indicated that they would not operate the Long Pond Factory for the 2016 sugar cane crop, citing "serious financial problems".

In response, the previous administration approved $213 million in transportation support to assist farmers with the incremental cost of moving more than 116,000 tonnes of cane from Trelawny to Appleton Estate in St Elizabeth and Worthy Park, St Catherine.

Asserting that the Long Pond situation has almost been resolved, Samuda said the facility would be reopened in a week. "We will then be reaping cane from Long Pond, saving some 85,000 tonnes of cane."

According to Samuda, a large portion of the cane to be harvested belongs to small independent farmers who would suffer immeasurable damage if the Government had not taken action.

"We will continue to intervene to the benefit of small farmers and large industrial players who find themselves in difficulties."

This, he said, would be done through giving advice, where necessary and beneficial through discussions with Appleton, in the utilisation of cane fields.