Tax break for all - No PAYE worker to be excluded from $1.5 million relief plan - Shaw 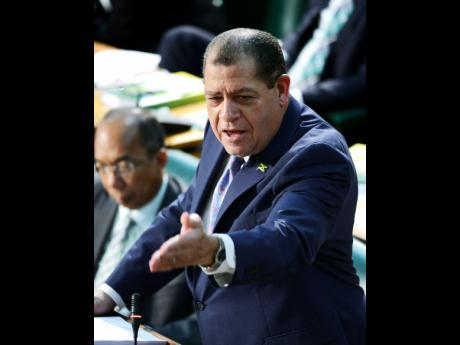 File
Audley Shaw, minister of finance and public service, opens the Budget Debate in the House of Representatives yesterday.

Minister of Finance and Public Service Audley Shaw yesterday unveiled a modified version of the Jamaica Labour Party's (JLP) campaign promise of a $1.5-million income tax break, which will now apply to PAYE earners across the board.

"We are extremely pleased that one of the first and very important measures this new Government has now enacted is to grant tax relief to hard working Jamaicans," Shaw declared as he opened the Budget Debate in the House of Representatives.

The finance minister told the House that, instead of immediately as promised on the campaign trail, the income tax threshold would be increased to $1.5 million over two financial years and now embrace more than 100,000 persons who were not initially captured in the plan.

The adjustment to the income tax threshold will result in an increase of as much as $8,490 in monthly take-home pay.

However, persons earning over $6 million per annum will see an increase in marginal tax rate to 30 per cent, up from 25 per cent.

Shaw said that those persons to whom the 30 per cent rate will apply would, in real terms, be paying 27.5 per cent as they would also be benefiting from the increase in the threshold.

Together, the income tax measures will result in a $12.5-billion reduction in revenue to the State, which will be made up for through more than $13 billion in increased taxes in other areas.

Among the revenue generators are an increase in the specific special consumption tax (SCT) component by $7 per litre on petrol that is expected to yield $6.5 billion, starting today.

Shaw said the Government would also introduce a SCT regime for liquefied natural gas (LNG) and revise the regime for heavy fuel oil (HFO). This measure is expected to yield $1.4 billion.

The specific SCT on cigarettes, cigars, cigarillos, cheroots (including cigars, cheroots, cigarillos of tobacco substitutes) will also be increased by $2 to $14 per stick for a projected yield of $574 million.

There was no indication from Shaw, however, that the tax relief would be retroactive, as he had previously promised in interviews with journalists while explaining that the April 1 deadline for implementation would have to be delayed.

Shaw had said the Government had to hold off on implementation after learning, on taking office after the February 25 general election, that the anticipated source of funding to make up for the reduction in income tax revenue had been otherwise utilised by the previous administration.

"We promised a threshold benefit up to $1.5 million and we have delivered on that commitment," Shaw declared yesterday to desk thumping from colleagues on the Government side of the House.

He added: "It is the cries of these Jamaicans that we heard that led us to consider providing $1.5 million tax relief for some of the neediest workers in our society."

Shaw reiterated that the top-line aim of the Government is to reduce the level of taxes on individuals and businesses.

He said that instead of the promised 118,000 persons who stood to benefit from this PAYE tax exemption measure, the new proposal embraced 251,792 persons on the PAYE roster.

Shaw said thousands of other self-employed people would now benefit from the raising of the current PAYE threshold from $592,800 to $1 million on July 1, 2016.

He added that a much larger number of working Jamaicans would also benefit when the threshold is raised to $1.5 million on April 1, 2017.

"Under this new, expanded, and exciting tax relief from this new Government, many more Jamaicans will be able to participate in supporting the economic growth agenda," he said.

Shaw claimed that the Government will act on its philosophy and belief that Jamaicans are much better at spending their earned money than the Government, so the Government should take as little direct income tax as possible.

"It is our job now as Government to move GDP (gross domestic product) growth to a permanently higher plane," declared Shaw.

He added: "We consider a shift from direct to indirect taxes to be an obvious policy to consider and implement ... . In arriving at this conclusion, we availed ourselves of the plethora of research."

Shaw also promised to seek a close partnership with the hard-working Jamaicans.

Shaw said that the Government remained committed to a comprehensive tax-reform package, for which it did so much work up to 2011 when it last served as a government.