Henry gets thumbs up for first 100 days in office 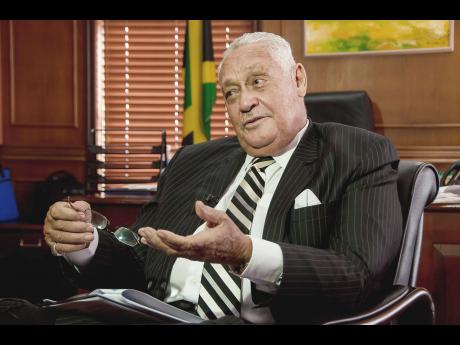 Stakeholders in the transport sector have welcomed the consultative approach that Minister of Transport Mike Henry has brought to the transport portfolio since taking office.

Leading up to the first 100 days of the Jamaica Labour Party (JLP) administration, the National Council of Taxi Associations (NCOTA) and the Jamaica Association of Transport Owners and Operators (JATOO) have given good ratings to Henry.

NCOTA President Dion Chance has said Henry has been very responsive to the concerns of players in the transport sector.

"I wouldn't grade him down at all, you know, because he started some meetings. We had about four consultative meetings and we seem to be getting somewhere. It is more than we had with Minister [Omar] Davies; he always referred us to the Transport Authority, so I would give a thumbs up to Mr Henry for his first 100 days," he said in giving his assessment to The Gleaner.

Chance indicated that he was eagerly awaiting Henry's presentation in the Sectoral Debate as announcements regarding important policy changes for the sector are of key interest to the NCOTA membership.

Chance said he was expecting the transport minister's presentation to address some of the decisions that would have been taken coming out of the consultations with stakeholders.

"I know that we should be hearing something from him in his Sectoral Debate [contribution] as to some decisions that have been made, so we await those, but, apart from that, I give him thumbs up because he has at least met with us and we have been able to give our problems and solutions in going forward," he added.

"I would give him 85 per cent and, as far as I am concerned, that is a good mark. He has so far listened to all we have had to say and has tried to take action on some of it," he said.

Barton said he was particularly pleased with the selections made by Henry in regards to the composition of the Transport Authority board.

"The minister has responded to all our letters and all our communications. He has promised to meet with us at an opportune time. So far, I am upbeat about the new minister," he said.