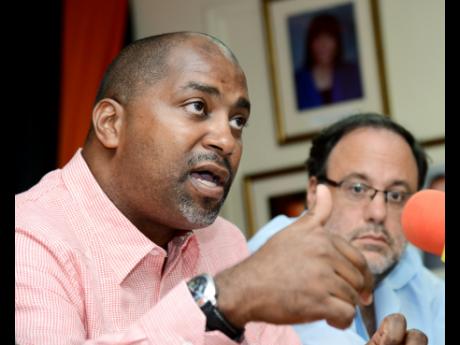 People's National Party (PNP) Deputy General Secretary Julian Robinson, who chaired the party’s postelection appraisal committee, yesterday disclosed that among the key findings of the committee was that the party ran an election campaign best classified as disastrous.

Robinson, who was addressing a press conference at the party’s Old Hope Road, St Andrew, headquarters yesterday, said the 13man committee that interviewed a wide cross section of individuals found that the party’s campaign organisation and its communication campaign strategies were at cross purposes, resulting in the disaster that unfolded.

Now, on the back end of an election loss, the party has accepted that poor communication and incoherent messaging led to its downfall and resulted in the one-seat loss to the ruling Jamaica Labour Party (JLP).

In short, the party was not ready for a general election and the appraisal committee proposed that all future election strategies adopt and follow the central campaign management guide.

“Our findings also indicate that there was a breakdown of trust among elements of the leadership leading into the campaign. This was never resolved and led to the campaign being dysfunctional and divided. The party’s message did not communicate hope and was incoherent ... .” said Robinson.

He said there was an overall campaign team that answered to a communication team but later admitted that there were campaigns within campaigns, adding to the dysfunction and incoherence.

“We felt there were specific issues around the campaign: the issues about communication over the four-year period; the lack of a link between the policies of the Government within the framework of what the party stood for,” Robinson said in response to questions from The Gleaner.

“We certainly felt there were deficiencies in both areas – in the campaign and in the period leading up to the campaign.”

He said: “It was apparent that there were different centres within the campaign management structure and there was a lack of coordination in the fundraising effort. Instead of having a single centre that had all the funds coming into it, it was clear that there wasn’t that central coordination of all the funds that came into the PNP as a whole, and as such, that led to some suboptimal outcomes, quite frankly.”

Many of the party’s accomplishments, according to Robinson, were not communicated to the wider public as part of the election message. The appraisal committee focused on three main areas as it sought to find answers to explain the election loss, in which the JLP took 32 seats to the PNP’s 31.

The committee focused on the party, the Government, and the campaign.

Robinson said he would recommend that a subcommittee of the executive committee be established to monitor the implementation of recommendations contained in the report, some of which were identical to those made in the 2008 Meeks Report, which examined the party’s 2007 election loss.

He acknowledged that the party began partial implementation of the Meeks Report, but did not complete the changes.

According to him, the mistake ought not be repeated.

Senator Mark Golding, another party official who took part in the press conference, said the party must accept that it needs to digest the recommendations of the Robinson committee.

“... So that the structures of the party are aware of the recommendations that have been made, it’s explained to them, and their comments are put forward, and then the organs of the party will make decisions as to what ought to happen ... ,” explained Golding, who is one of two candidates for chairmanship of the St Andrew South constituency executive to be vacated by Member of Parliament Dr Omar Davies.

Golding said the report presented a framework to be digested, and, ultimately, going forward hinges on its acceptance.

Some of the key findings of the appraisal report:

1. The need for the party to reaffirm its core philosophy and communicate its policies within that framework.

2. The need to strengthen the secretariat in the areas of organising, enumeration, communication and recruitment.

3. The implementation of a pilot programme to reform the role of party groups.

4. The establishment of a group of mentors to provide guidance and support, especially to new members of parliament and candidates in the rebuilding process.

5. The need for aspirants to be approved by the integrity commission before facing the delegates.

6. The need to develop a time frame within which internal disputes are resolved and the decisive application of the necessary sanctions.

7. The adoption of the central campaign management manual to guide to national campaigns.

8. Strengthen the political capacity and relationship of the arms and affiliates by developing strategic objectives and a political work programme for each.

The report will be released after the June meeting of the national executive council meeting (NEC).