'How we teach is wrong' - Poor approach to math, science showing up in GSAT results - Morrison 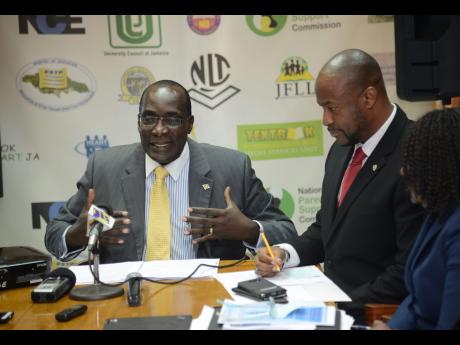 While this year's Grade Six Achievement Test (GSAT) results have shown improvements in all areas but communication task, a closer look at the trend of mean scores from 2014 to 2016 shows performances in mathematics and science have not reflected the rate of improvement seen in the more literary subjects.

The results, released yesterday by Education Minister Ruel Reid, show jumps for social studies and language arts when compared to the other subjects, leading Professor Errol Morrison, newly appointed chairman of the Scientific Research Council, to attribute the phenomenon to the methods used to teach the subjects.

"I feel it is due to a lack of awareness of what science really is and the way in which we teach it carries such a formality that when you start to talk about math and science, it puts off many of our students. In fact, it could even put off teachers," he said, while reacting to the GSAT results, which were released yesterday.

The GSAT data released by the Ministry of Education show that the largest increase in mean score was in language arts, which saw a four-percentage-point increase in the average score attained by students when compared to last year's.

Social studies registered a marginal increase of 0.4 per cent and communication task saw a decline of 2.5 per cent. Despite the decline in communication task, the subject area still commanded the highest mean score of 72 per cent.

Taking 2014 as a base year, the data show that the mean score in mathematics has not returned to the levels achieved in this watershed year when a mean score of 60 per cent was achieved. Science has achieved only marginally increases in the three-year period. Communication task, language arts and social studies have, however, all overshot the mean score attained in 2014.

According to Morrison, the discourse approach taken to social studies, language arts and communication task engenders discussion which engages students.

This approach, he said, however, is missing in the teaching of mathematics and science.

"This thing about mathematics is hard and science is hard needs to be demystified, and from very early we need to make them friendly subjects. I feel it is the way it is being taught. I don't think it is a lack of ability of our students," the SRC chairman said.

Morrison has called for greater emphasis to be placed on the training of teachers in the science, technology engineering and mathematics areas and indicated that the SRC will be ramping up its activities in this regard.

"How we study it, how we test for it, how we teach it is wrong. A lot of it is memorising ... so from the tertiary level now, you are receiving what is coming up from the primary and secondary level, so already much of the damage has been done; and even when they talk about remedial classes, you are not getting really that fundamental problem solved ... because I feel that our teachers don't have the wherewithal," he said.