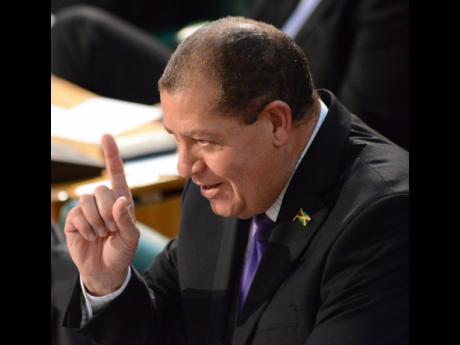 Reacting to concerns that the raising of taxes on fuel has resulted in the spike in electricity bills consumers will face this month, Finance Minister Audley Shaw is arguing that the increase in special consumption tax (SCT) on heavy fuel oil (HFO) is only a nominal percentage of the rate increase the Jamaica Public Service Company (JPS) announced last week.

In response to questions from The Gleaner, the minister said that of the 12.8 per cent increase the JPS intends to apply, the increase in the SCT on HFO "translates to a mere 2.3 percentage points" or 18 per cent.

"As estimated in the tax measures, the effect of the increase in the overall SCT (specific and ad valorem) on HFO and LNG is approximately J$1.35 billion (or approximately US$11 million) in fuel costs to JPS. This would then approximate to a cost of US0.36 cents per kWh," the minister said.

Additionally, Shaw said he at no point stated that the increase would not affect the rates of the JPS as no one specifically asked him about the SCT on HFO.

"With reference to the comments by the minister of finance and the public service at the post-Budget press conference, it should be noted that the minister spoke to a question posed on the impact of the J$7.0 increase in SCT on fuel used for the purposes of ground transportation," the statement read.

"The minister's comments were not geared towards the impact of LNG or HFO on electricity prices. There were no questions posed about the effect of the increase in the overall SCT (specific and ad-valorem) of HFO."

The increase in SCT on HFO that was announced during Shaw's May 12 Budget presentation was one of three reasons Jamaica's only power distribution company attributed to this month's increase.

During his post-Budget press conference on May 13, Shaw, in responding to concerns that the new tax measures would affect light bills, said: "The argument also is that JPS light bills will go up as a result. And I want to remind everyone that this tax (on fuel) does not apply to Jamaica Public Service at all. It is only related to SCT for fuel for road transport only."