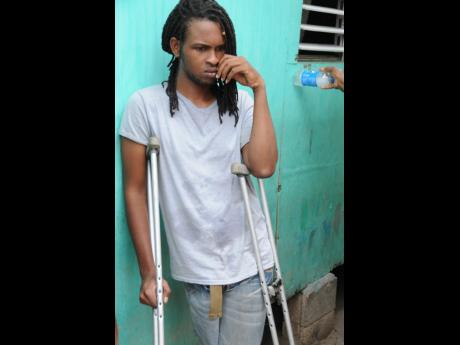 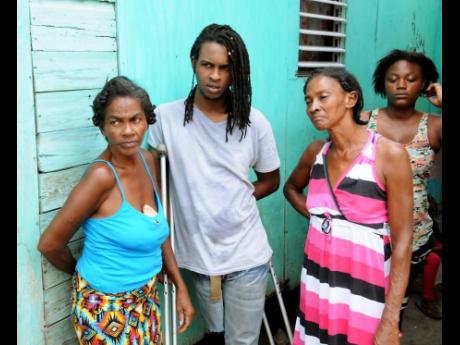 Eight years later, his only cry is for the Government to consider his case and release the money that it has been ordered to pay him. For, already, he is looking forward to marking his 26th birthday on Christmas Day with a difference - a right leg.

"Life kinda stressful fi me, yuh know, 'cause of the position weh mi deh inna. Mi have it hard 'cause from mi a 17 mi drop out a high school and never get fi do mi CXC (Caribbean Examinations Council) subjects," the former Waterford High School student told The Gleaner.

Pitterson, whose story points to a deep well of faith amid adversity, did not get to complete high school as months before he could sit his external exams, a policeman's bullet to his right leg saw the end of that ambition.

The leg was amputated.

In April, seven years after a case of negligence was brought against the Government, the Supreme Court ordered it to pay the young man approximately $30 million.

Pitterson, who also lost two fingers on his right hand, was also awarded US$251,752 (J$31 million) as cost for future medical care.

According to court documents, on April 26, 2008, Pitterson was walking along the Christian Pen main road in St Catherine with friends when they were stopped by a police constable. As the cop alighted from a service vehicle, his firearm discharged and the teen boy who had dreams of becoming a Jamaica Defence Force member was hit in the right leg.

"I didn't even hear the shot. Mi just feel myself drop pon di grung. From that, me block out. Mi find myself inna di hospital. Mi deh hospital fi over three months. Mi all fall in coma one a di time," he related as he sat outside his Gregory Park house.

His crutches were next to him.

"Is a big setback fi mi inna life," he said, noting that his aim is now to further his education and get training in computer science.

Pitterson's parents had enrolled him in a St Andrew school to complete his studies, but financial issues, mixed with his health problems, derailed that effort.

The stressful life, Pitterson said, could be eased if the Government heeded the call of his lead lawyer, Christine Hudson, who wrote to the attorney general (AG), Marlene Malahoo Forte, making a special request for a lump-sum payment to facilitate Pitterson getting a prosthesis to enable him "to become functional and improve the quality of his life".

"The request from counsel for Mr Kamaal Pitterson came to my attention today (July 14) and we have responded," Althea Jarrett, an official in the AG's Chambers, told The Gleaner in an emailed reply when contacted on July 14 for a response to the July 5 letter.

These days, Pitterson gets support from a host of relatives who shared that the 2012 murder of his sister and February death of his grandmother have been weighing heavily on him.

One of his aunts, Paulette Pitterson, said the Government has a duty to ensure that the young man is given another chance to realise some of his goals and contribute to the society's development.

"Him strong still, yuh know. Mi member nuff days mi used to go a UC (University Hospital of the West Indies) and him lay down like I dead - all of that and nothing all now? Him need some help!" she appealed.

Meanwhile, declaring that his life has been forever altered, Pitterson said he has forgiven the policeman, even as he does not recall the cop apologising for the negligent act.

"I don't have any bad feelings towards the police. We have to forgive each other and leave all the judging to the Almighty. It's unfortunate," Pitterson said, adding that these days he tries to cook and do other home chores.

He recalls that the cop visited him at the hospital, but "dem time deh mi did deh inna different meditation and di whole day mi cry, but mi forgive him".

Saying she has heard the "cries", Attorney General Marlene Malahoo Forte told the Parliament last week that as at June 27, the Government owed J$512 million to people who had successfully sued the State over the last two financial years.

Approximately J$343 million has been budgeted for payments this financial year. Payments are made on a first-in, first-out basis and Pitterson's case joins a long, growing list.