We are all Jamaicans! 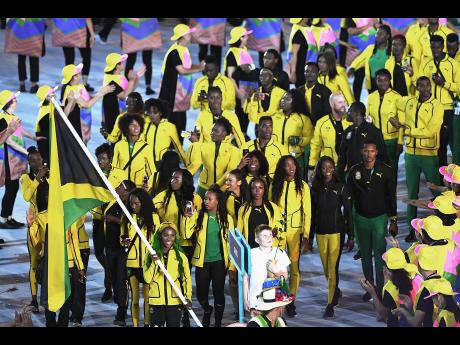 Ricardo Makyn
Shelly-Ann Fraser-Pryce carries the Jamaica national flag as she leads the parade of athletes during the Opening Ceremony of the 2016 Rio Oympics inside the Maracana Stadium, Rio de Janeiro, on Friday, August 5. 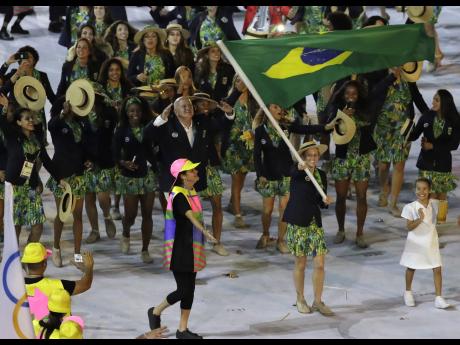 “We love Jamaica, this is Brazil, everybody loves Jamaica!”

Carlos Luiz Santon was trying to explain why he was wearing a Jamaican t-shirt when his country was hours away from celebrating the first Olympic Games on the continent.

His sentiment received further clarification as the pocket-sized Shelly-Ann Fraser-Pryce held Jamaica’s flag high, as she led the island’s contingent inside the legendary Maracana Stadium during last night’s rather colourful Opening Ceremony.

The stadium announcer’s baritone-rich ‘Jamaica!’ was met with a deafening welcome, as the 60,000-strong crowd inside the venue showed its support for the casually dressed group wearing a gold, black and green mix of bomber jackets, polos, leggings, skirts and overcoats

“You will see. Bob Marley, Usain Bolt, they are Brazilians to us,” added Santon.

Marley made a few trips to Brazil and played football with a few notable locals back in the day. Bolt was not feeling up to the Opening Ceremony, deciding against the long standing, choosing instead to watch from the Olympic Village.

But while one Jamaican sprinting legend was missing, another was revelling in the honour of becoming Jamaica’s 11th flag-bearer at the Summer Olympic joining the likes of Arthur Wint, Merlene Ottey, Deon Hemmings, Juliet Cuthbert, Veronica Campbell-Brown and Bolt himself – names at the very top of Jamaica’s sporting hill.


Fraser-Pryce is the fastest female flag-bearer ever with a best of 10.70. American Evelyn Ashford, the USA's flag-bearer in 1988, has a best of 10.76. She also tops the podium for best hair with her green and yellow mane a real standout.
She will have almost a week before she strides into action in the women’s 100m but Jamaicans and ‘Brazilian-Jamaicans’ alike won't have to wait too long to start cheering for their sporting stars.

The action starts in the pool and on the gym floor for the Jamaicans tomorrow with Toni-Ann Williams, the first Jamaican to qualify for Gymnastics at the Olympics, set to flip, twirl and spin her way around the Rio Olympic Arena floor in what is sure to be a tough artistic gymnastic competition. She will feature in the first subdivision, which starts at 9:45 a.m. (7:45 a.m. Jamaica time)

Swimming sensation Alia Atkinson is next in action as the world record holder and world champion in the 100m breaststroke starts her fourth Olympics and what many expect will be a successful medal campaign with the first heat set for 2:11 p.m. (12:11 p.m.) tomorrow.