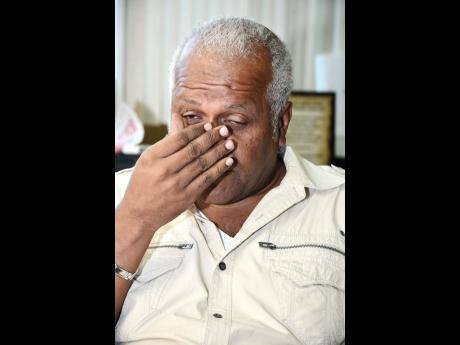 Patrick Planter
The Rev Al Miller during an interview with The Gleaner at his Fellowship Tabernacle church located at 2 Fairfield Avenue, Kingston 20, yesterday.

The Reverend Merrick 'Al' Miller yesterday revealed that he trusted former Police Commissioner Owen Ellington, but now feels he was betrayed by the former top cop.

Miller's revelation came as he opened up about his decision to act as an intermediary between drug kingpin Christopher 'Dudus' Coke and Ellington, and the feverish, last-minute attempts he made to encourage the reputed Shower Posse leader to surrender peacefully to Jamaican authorities before the looming police-military incursion into his west Kingston stronghold in May 2010.

The founding pastor of Fellowship Tabernacle church in St Andrew was convicted in July for attempting to pervert the course of justice after Coke was captured in a vehicle Miller was driving along Mandela Highway in St Catherine. He has maintained that he was taking Coke to surrender to the authorities.

"And that's why all the dialogue of those hours was to convince him [Coke] that 'you can trust the system, you can trust the commissioner'... so I was very comfortable, very trusting with him [Ellington]," Miller continued, making reference to several meetings he had with Coke.

He recounted how he was blindsided by media reports on June 22, 2010 that he had been listed as a person of interest by the police minutes after Coke's capture and said that he believed Ellington gave the directive for him to be charged. "There is nobody else who had that authority, and it was from the commissioner's office that the request had come for me to turn myself in," he underscored.

"So, of course, I feel betrayed, because why ... ?" he asked rhetorically.

"If you get a hold of the statement he gave immediately following his arrest and read his account of the events in that statement and contrast it with what he is saying now and what he has been saying over the past six years and see if he is a man to be believed," Ellington told The Gleaner last night.

"If you publish anything said to you by the Reverend Al Miller, you run the risk of libelling others. If you want to take that risk, fine," he added.

The popular clergyman, who has scheduled a tell-all news conference for today, also pulled back the curtains on how events unfolded in the hours before Coke was captured.

He confirmed picking up Coke in St Ann, but insisted that it was not at a Government Protocol House located in the parish. Miller declined to say where he met Coke.

He recalled receiving a telephone call on June 21, 2010 from someone known to him who informed him that Coke was prepared to turn himself in and wanted his assistance. "He [the caller] said to me, 'I talk to commissioner 'bout it already because him [Coke] say is only you and commissioner him a deal with'," Miller recalled.

The clergyman said the following morning he got another telephone call from someone unknown to him who enquired if he was still willing to assist with Coke's surrender.

Miller said he met the caller and two other men at a location in the Corporate Area and they requested that he leave behind his personal motor vehicle and BlackBerry cell phone before beginning the trek to St Ann. He said when he got to St Ann, he was taken to a house and asked to wait.

"I was left there for about half an hour and then they returned with Mr Coke in a vehicle and asked, 'Reverend, will you take him in?' So where he is coming from I don't know," he recounted.

Miller said he was not. "I was more caught up with thanking God we were able to bring a resolution to a crisis situation that is costing so much."

He said during the trip into Kingston, Coke expressed remorse for the bloodshed in his west Kingston stronghold. "He said, 'Rev, since they said this thing start with me, I'm giving up myself so that it must end with me'," Miller recounted.

"He spoke about the fact that this thing [incursion] happened and it wasn't necessary," Miller said.