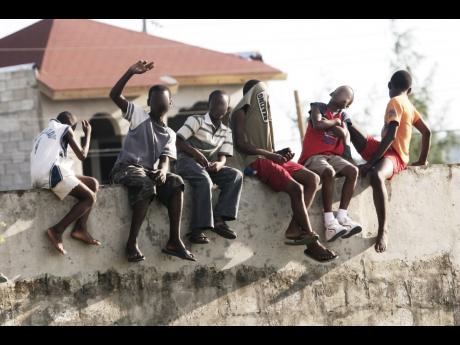 An Inter-American Development Bank (IDB) study on crime and violence in Jamaica has noted that most victims and perpetrators of homicides are male, young, uneducated and poor.

The study, which disaggregated homicide data based on gender, indicates that 90 per cent of all victims of homicides are males.

"Given that most killings are gang-related and confrontational, the gender profile of the killers is expected to be symmetrical," the report said.

According to the study, being male and young multiplies a person's risk of being a victim of homicide.

Homicide data for 2013 show that 51 per cent of victims were males aged 35 or younger. Of those individuals, 27 per cent were ages

While noting that murder is distributed across all age groups, the IDB says it is primarily a problem that affects youth. Analysis of the age distribution of homicides among young males in the study shows disproportionality in homicide victimisation for males in the 26-35 age group, who make up only 15.8 per cent of the population.

The 15-24 age group represents 19.5 per cent of the population and accounts for 20.4 per cent of all homicide victims.

"People are expected to age into and out of the high-risk pools or age sets of potential victims," the study said.

Turning its attention to the perpetrators of homicide, the study pointed out that as is the case with homicide victims, the vast majority of homicide suspects are male and young.

"Marginalised urban males between the ages of 15 and 25 are responsible for a large share of the violence in any given society, so demographics matter. This is consistent with Jamaica Constabulary Force (JCF) data showing that violent crimes are disproportionately concentrated in communities that experience high levels of social exclusion, in communities often labelled as inner-city or informal settlements, and among young men between the ages of 16 and 30. So social exclusion also matters," the study said.

The IDB study further pointed to the fact that gangs are a major contributor to Jamaica's homicide rate and are generally populated by males below the age of 35.

According to the JCF, there were 238 gangs operating in Jamaica in 2013.

The gangs are classified as first-, second- and third-generation gangs. First-generation gangs, which account for 90 per cent of the 238 gangs, are the least organised and exhibit the lowest level of violence.

"We know little about the risk factors associated with joining gangs. So while much is known, much more needs to be understood in order to better inform the various types of prevention and control programmes," the study said.