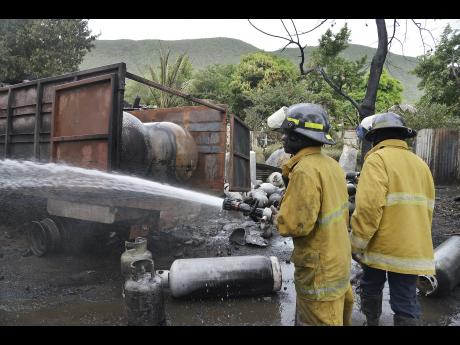 Norman Grindley
Firefighters carry out cooling-down operations after the explosion on Jacques Avenue in the Mountain View area of St Andrew on Sunday.

Experts at the Jamaica Fire Brigade have determined that a compressor being used to convert and transfer liquefied petroleum gas (LPG) from one of two 1,000-gallon tanks housed in a truck ignited and caused Sunday's fire at 3 Jacques Avenue, injuring five persons, including 48-year-old Everett Austin, who succumbed to his injuries.

This revelation has come even as local marketing companies are to meet to find ways to end the illegal trade of gas.

Assistant Superintendent Courtney Thompson of the York Park Fire Station told The Gleaner that investigations show that the compressor malfunctioned and ignited as a result of overuse, triggering the explosion of cooking gas cylinders containing propane.

"It was the compressor that actually started the fire to make it explode," he said, pointing out that the motor "ran hot" after being used to carry out the operation, which would have necessitated the use of bigger-size wiring to effectively carry the electricity load from the 220 voltage required.

Emelio Ebanks, public relations officer at the Jamaica Fire Brigade, explained that all public buildings that are intended or occupied for business must be certified by the brigade, as required by law, following a thorough inspection. He said the premises where the fire and subsequent explosions occurred were never on its list of certified properties.

"We didn't even know about this business. This was a commercial operation that was taking place in a residential community, and residents have been so tight-lipped after the fire. I doubt if any of the regulatory authorities knew about it," he said.

Meanwhile, Rohan Ambersley, chief executive officer of Gas Pro, said all three local marketing companies of LPG - the others being Petcom and Industrial Gases Limited (IGL) - are to meet to discuss how to stamp out the illegal trade. However, they are awaiting a full report on Sunday's fire, which resulted in third-degree burns to all the victims. For this reason, he said a date for this meeting is yet to be decided.

Explaining that he knew nothing of the facts surrounding the tragic incident, the Gas Pro executive refused to be drawn on what might have occurred. "I have no information there," he said but stressed that adherence to established and emerging safety protocols is pivotal to his company's operations.

"We take it very seriously, and, therefore, we go a very far way in ensuring that those who are selling the product for us are provided with the necessary training. And we ensure that the equipment we use is fit for purpose, and, in terms of our trade activities, they align to the highest safety standards possible."

There had been assumptions in some quarters that Austin, who died in the explosion, was an employee of IGL Limited. He is believed to have been the driver of a truck that was on the premises at the time of the explosion with two 1,000lb gas cylinders in the back of it. However, IGL Limited has distanced itself from Austin.

"The management team of IGL Limited wishes to advise the public that Mr Everett Austin, who died tragically over the weekend as a result of the alleged filling of LPG cylinders at a location on Jacques Avenue, was not an employee of IGL and is not associated with IGL in any way. We understand that he was a contract driver for a petroleum-haulage company. We regret the tragic circumstances, including the loss of life and property, as a result of this apparent illegal act," the company said in a statement issued on Tuesday.

Meanwhile, a source close to Petrojam told The Gleaner that they did not sell cooking gas to end users and that the company would not be involved in such practices.

"Based on what is happening out there, it's not Petrojam per se. [Petrojam] does not sell cooking gas directly to the end user. [Petrojam] would not be involved in any kind of illicit activity such as that," the source said.

A cooking gas provider in Kingston was adamant that operations similar to the one that went up in smoke infringed on the profits of legal cooking-gas providers.

"It affects the sales. Customers are going to gravitate towards the cheaper price. They are selling below our buying price, and second, they full them more," he said.

Davis Whyte: Bungling board causing delay in appointing new fire chief
Leaderless brigade - Persons being given short-term acting stints in almost all top posts in the critical fire service
Fire hydrants folly - More than 3,600 not working across the island
Cooling down - Number of children killed in fires declining