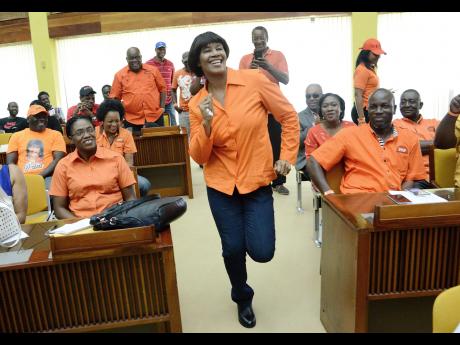 Rudolph Brown
Portia Simpson Miller, president of the People's National Party (PNP), shows her councillors and prospective local government election candidates that she is fit and ready for the polls during a PNP national candidate councillors meeting held yesterday at the Jamaica Conference Centre in downtown Kingston yesterday.

Simpson Miller, who is also the opposition leader, was addressing candidates during a party meeting yesterday at the Jamaica Conference Centre in downtown Kingston.

"I want to remind you that you are to meet with your returning officer to ensure that everything will be okay. Leave nothing to chance," she declared, noting that nomination day, set for Friday, was only days away.

Simpson Miller stressed the importance of every member of the PNP hierarchy going out into the field and connecting with voters if the party, which controls all 13 parish councils and the Portmore municipality, is to retain its stranglehold on local government.

The party president also made it clear that she would continue to lead by example.

"Comrades, we have to go out there and vigorously defend the stewardship of the People's National Party in this election. We missed a grand opportunity in the general election in February and we must make sure we speak to our achievement on behalf of the Jamaican people.

"For the local government elections, they overwork me, but I will have to be out there and I am going to be out there giving support to our local government candidates. It is important that we give them all the support we can to ensure that the People's National Party will retake this country by way of the local government elections. Let us put on our walking shoes and intensify the walks. Let me say to all members of parliament, councillors, and councillor candidates, I said it before, I'm gonna repeat it, if you do not get on the ground among the people, do not cry when you do not win."

Regardless of how safe their seats are, the party president insisted that councillors and prospective candidates should take nothing for granted and, therefore, continue work to keep alive the party's "track record of accomplishments" since taking over the reins of local government in April 2012.

Simpson Miller is banking on the PNP's "enviable track record in advancing the local government agenda" to help it buck this trend in the country's electoral history.

"While it is usual for the political party which wins the general election to also take local government, we are going to vigorously defend all parish councils. All PNP MPs, councillors, and councillor candidates, campaign managers, cluster managers, polling division captains, outdoor agents, indoor agents, and runners must go out and tell the people about the work of the People's National Party and its history with local government," said Simpson Miller.

She reiterated the claim by campaign director Dr Peter Phillips that the Jamaica Labour Party had not only failed to deliver on its promise of curbing crime but that this had risen to intolerable levels since the party took power in February.

"The people have seen higher taxes, higher electricity bills, higher food bills, higher gas prices, and higher crime rates, which now have affected our children in levels that must concern all of us. The PNP has always been with the people and for the people. Our strong and committed team will travel across Jamaica speaking to the people about our track record in local government."