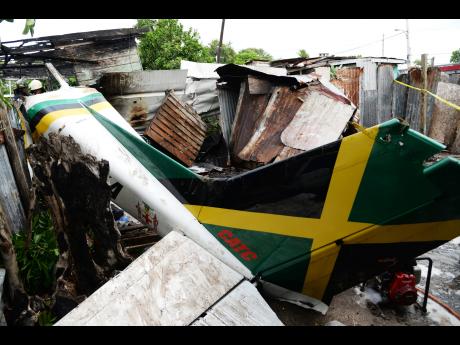 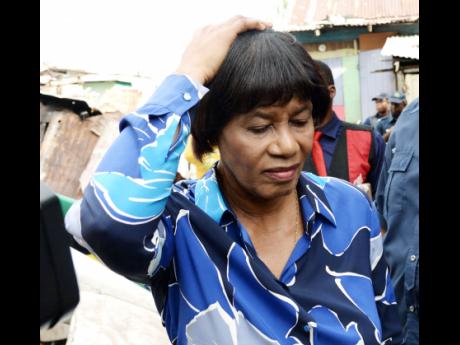 A Cessna 172 aircraft, with two students and their instructor aboard, crashed shortly after take-off from the Tinson Pen Aerodrome in Kingston yesterday, ending lives and dreams, shattering the hopes and joy of many, including the family on whose house the plane crashed in Greenwich Town, Kingston 13.

Family members who arrived on the scene, along with onlookers, did not hold back the tears and emotions as they tried to digest what was a picture of disaster and grief. They were attacked by the stench of burning flesh and smoke emanating from the wreckage.

Communications officer at the Jamaica Constabulary Force Stephanie Lindsay said that one of the students was battling for his life in hospital, while the instructor, along with the other student, had died.

Last night, Chief Medical Officer Dr Winston De La Haye also told The Gleaner that the student pilot, who is critically injured, was expected to be taken to the intensive care unit.

"He became conscious enough to give a history to doctors at KPH (Kingston Public Hospital). He's now sedated, with burns to 60 per cent of his body, bone fractures, eye trauma, and, obviously, inhalation injuries from any fumes he is likely to have inhaled," De La Haye said.

Keith Clarke, the man residents say was one of the many persons who rushed to the scene to assist the victims, said it was a frightening experience that would stay with him for a long time.

"We hear a sound, but because is a regular ting fi di plane dem give off sounds, we never made anything of it because the school is right there. By the time we run over, we start throw water. All sand we throw. I heard one of the man trying to talk, and den we start to wet him up and fight to get him out and put him on top of the plane. After that, mi go with the police to the hospital and come back. Mi just hope seh him make it," said the resident.

Linton Beckford, who now resides in the United States, said that while he was a student at the school, he got the opportunity to interact with the late instructor. Beckford said it was a sad day for him, along with many of his colleagues.

"He's very disciplined. He's not a guy who talks a lot. Very good guy. A cry mi waa cry because is a person that close to me like that. I spoke to him two weeks ago. Me and this person fly together. I trusted him with my life, so we have a level of respect for him. I'm all the way in New York and mi a tell you seh it rough," he said.

Leader of the Opposition Portia Simpson Miller, who is also the member of parliament for St Andrew South Western, where the tragedy occurred, was close to tears as she observed the scene. She told journalists that it was a traumatic experience for family members in addition to members of the community.

"I hope that the members of the family, in weeks or months to come, will find some comfort that although this disaster happened, their family lived to a certain age," she continued.

Spokesperson at the Jamaica Fire Brigade Emilio Ebanks said there were no reports of residents being injured.

"We got a call at approximately 1:34 p.m. that a plane had crashed in the Greenwich Town area. We responded immediately - two units from York Park and the other from Trench Town. When they arrived on the scene, we sent another unit. What we were told is that the plane developed mechanical problems shortly after take-off and was returning to base," he said.

"There were no injuries to any persons on the ground, so I think it is safe for us to assume that no one was in the house based on where we see the plane has landed. If persons were in the house, there would have been injuries."

In the meantime, the Jamaica Civil Aviation Authority, in a release, said a team from its Flight Safety Department had been dispatched to start investigations into the accident.

Up to press time last night, the police had not released the names of the instructor and the student who died in the crash.