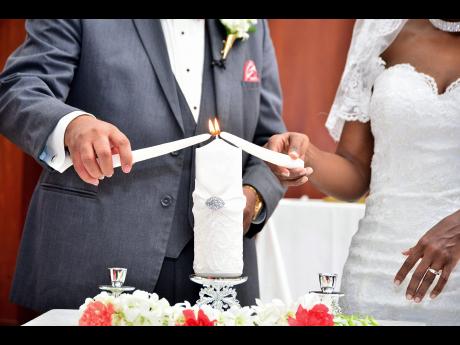 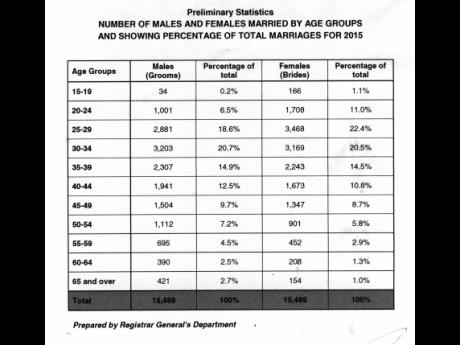 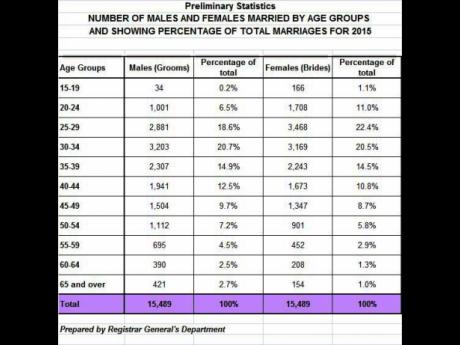 Jamaica has the dubious distinction of being the country where men and women on average wait the longest to get hitched in matrimonial bliss.

According to the 2016 edition of International Number Ones, a study compiled by London-based journalist David McCandless on his visual blog Information Is Beautiful, out of 186 countries, Jamaica has the highest average marriage age for both men and women at 33.2 years.

Data from the Registrar General's Department reflect that last year almost 36 per cent of the men and 35 per cent of the women who got married were in the 30-39 age group.

Nigerian women get married the youngest at 17.6 years, and Madagascar leads the way for the men at 22.4 years.

Psychologist Dr Leahcim Semaj believes the delay in Jamaicans getting married is testimony to the solemnity we as a people place on making our relationships official and permanent.

"Well, first of all, we take marriage more seriously than other people do, so we don't just enter into it loosely," said Semaj.

He hastened to add that not because Jamaicans take longer to get married should it be viewed as a reluctance to commit, as there is, in fact, a three-tier structure to our 'marriage'.

"A lot of firstborn children are born in visiting unions, where the woman is either still living at home with her parents or living by herself," said Semaj.

"Then the second tier of our family structure is common-law union. It is only maybe in the upper class where people move into legal unions in their 20s. It is after living together and bearing a number of children together (that persons in the middle and lower classes will get married), so it is clearly between 30s and 40s and even 50s that some people get into legal marriages. You will say they marry late, but remember that two 'marriages' took place before that."

Social anthropologist Dr Herbert Gayle believes our history and economics are the two main factors hindering the majority of Jamaicans from walking down the aisle at a younger age.

"It is the adolescence of our development why we don't have sexy figures, so we marry late, and we don't marry a lot because those things require economic stability. In fact, we form common-law unions late too," said Gayle.

Dr Carolyn Cooper, recently retired professor of literary and cultural studies at the University of the West Indies (UWI), Mona, is of the view that something more rudimentary could be at the heart of Jamaicans delaying marriage.

"I think the delay is really more about having the resources to get married. In North America and the UK (United Kingdom), people will have a little registry wedding. Most Jamaicans don't want that kind of wedding," said Cooper.

"Folk wisdom tells us that we shouldn't get married until we can afford it. People want a big-splash wedding. So although they might be living together, they prefer to wait to have the actual wedding ceremony. So I think that's a big part of it; wanting to marry in style."

That is a view shared by consultant psychiatrist Dr Anthony Allen, who argued that due to economic constraints which hinder the lower and middle classes the concept of marriage is significantly delayed.

"If a man doesn't have a home for himself and partner, marriage is not at the forefront of his thoughts. What you will notice from persons that maintain informal unions is that they move from a visiting relationship to a common-law union, which includes sharing residence. As they age and begin to earn more, they set plans in motion to legitimise the relationship (via marriage). So with further economic and educational evolution, the average age will decrease, as it has over time," said Allen.

Fifty-two-year-old Andrew, who got married last year, agrees. "I was with my woman for 20 years and we had a 16-year-old son before we got married," said Andrew.

"It is because we both wanted the big wedding with the pretty white dress and the long veil, but we could not afford it so we delayed it until we had the money. It cost almost $500,000 for everything and we saved and planned for it," added Andrew.

Achieving as a unit

Stephanie Lewis, who wedded at 33 years old, said she and her husband were together for eight years before they got married, "working and achieving as a unit".

Added Lewis: "Marriage was not a priority at the time, even though it crossed the mind. Excluding the love and commitment factors, as you get older and wiser it's required for further stability."

But Sheldon Jones, a 23-year-old newly-wed, said: "I came up in a home where my parents wedded early and were always there to support me and each other. I admired that and wanted to follow a similar path while simultaneously experiencing love."

Senior lecturer in sociology at the UWI, Dr Orville Taylor, argued that one contributing factor to the small number of persons getting married is the evolution of Jamaican women.

"In the last two decades, we have seen a major upswing in the number of women who are being tertiary educated. Furthermore, women are delaying childbirth until much later," Taylor shared.

"There is much less social pressure on the progressive Jamaican women to be self-actualised by some man, who might not actually love them at all, putting some ring on their finger. In Jamaica, what we have seen is a significant and sustained increase in just the status of women, and so the significance of that wedding ring to make the woman complete has just diminished," added Taylor.

One popular view is that many Jamaican men are womanisers and, therefore, do not want to publicly, officially, and permanently commit to one woman.

But Semaj does not deem this to be much of a deterrent to marriage, as he contends that several women find a married man even more attractive.

"In fact, a lot of men have found out that when they are married they have more options, in that a lot of women prefer married men," said Semaj.

"Because being married, the man clearly has some stability and has some resources to work with. While any man over 35 and not married, something is questionable; is he a homosexual or is he so mentally unstable why nobody wants him?" said Semaj.