More deportees - Jamaica braces for their arrival from UK today 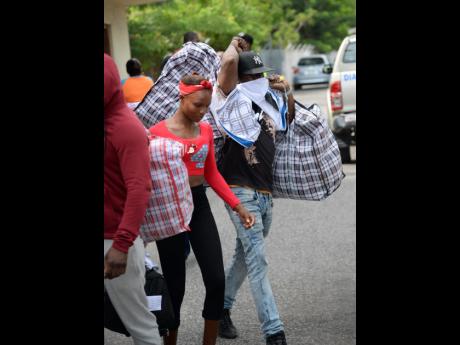 File
In this September 7, 2016 photo, persons who were deported from the United Kingdon are seen making their way from the Mobile Reserve headquarters in Kingston.

More than 100 Jamaicans have been sent back to Jamaica from the United Kingdom since the last mass deportation of 42 persons in September 2016, and another batch is on their way, as a charter flight is scheduled to land here later today.

This latest deportation comes amid continued discussions between the Ministry of National Security, the Ministry of Foreign Affairs and the British High Commission over concerns raised by persons who have been previously deported, many of whom no longer have family ties in Jamaica, having left here as children.

A release from the national security ministry sought to explain that all legal avenues of appeal in the UK have been exhausted.

The ministry said the returnees have no legal rights in the UK and that the Government of Jamaica is, therefore, obligated, under international law, to receive its nationals on their return.

"The standard arrangements have been put in place by the Ministry of National Security, in collaboration with the Ministry of Foreign Affairs and Foreign Trade, the British High Commission and at least one local voluntary organisation to receive the Jamaican nationals to be returned to the island on a charter flight from the United Kingdom," the ministry said.

The returnees will be met upon arrival in Kingston by Jamaica Constabulary Force personnel and an officer of the Diaspora, Protocol and Consular Affairs Division of the foreign affairs ministry, as well as representatives of the National Organisation for Deported Migrants (NODM), a non-governmental organisation funded by the British High Commission.

The ministry further stated that returned Jamaicans had also benefited from the consular services and support of the staff of the Jamaica High Commission in London throughout the deportation process.

"The Ministry of Foreign Affairs and Foreign Trade is seized with the circumstances of these individuals, and we remain available through our High Commission to advise Jamaicans in the diaspora who have raised specific concerns, including those regarding their relatives," said Ambassador Marcia Gilbert-Roberts, permanent secretary in the Foreign Affairs Ministry.

"We, too, will of course continue to work closely with the national security ministry and other supportive organisations to assist our nationals as best as possible," noted Gilbert-Roberts.

Meanwhile, Oswald Dawkins, president of NODM, has hailed the drive to lessen the spectre of discrimination and stigma on deported persons, but reasoned that more needs to be done to allow for faster (re)integration.

"Discrimination and the stigma of being deported is not as high as it once was, but lots more can be done to easily integrate our fellow Jamaicans into the mainstream," said Dawkins.

He said his five-year-old organisation continued to assist deportees with documents procurement, housing and employment, among other things.

Last year, former British Prime Minister David Cameron offered to help fund the construction of a modern prison on the island, with the understanding that 300 Jamaican prisoners currently in UK jails would have ended up completing their sentences there.

However, almost immediately upon assuming control of the Government, the Jamaica Labour Party led by Andrew Holness in January rejected the $5.5-billion offer.

Foreign Affairs Minister Kamina Johnson-Smith stated at that time that the terms of the offer were not sufficiently beneficial to Jamaica.

Big risk - Two-thirds of J'cans are without health insurance; say they can't afford it or it's not necessary
Jamaicans among thousands evacuated during wildfire in Canadian province