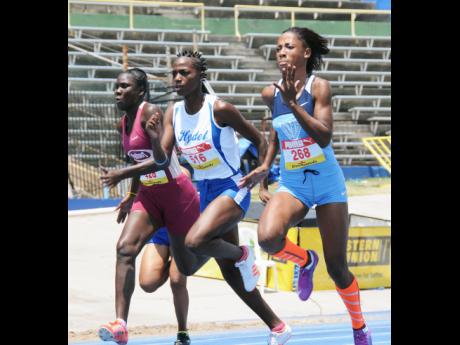 It's already widely considered the largest high school track and field championships in the Western Hemisphere, but many persons believe there is scope to grow the annual ISSA-GraceKennedy Boys & Girls' Athletics Championship and make it better, maybe even bigger.

The contentious issue of ticketing for the event rears its ugly head year after year. There have been numerous stories of persons reserving tickets online only to find that when the time comes to actually pay over, no tickets are available. As it stands, tickets went on sale at the stadium ticket office only this week - on the very day the 2017 Championships began.

Cooke, who now manages the Racers Track Club and its Grand Prix meet, said that she took some of the lessons learnt from her Champs days into administration of the Racers Grand Prix.

"I said, 'Under no circumstance I'm going to go through that again'. I know the stresses of reserve ticketing and when the number of tickets available is much less than the number of orders," she told The Gleaner.

Cooke suggested an online ticket-booking system. This would mean that persons from overseas could also buy tickets in advance, choose their own seating, and eliminate the issue of unfairness.

"People can reserve their tickets and come and then find out there are no tickets, but you can stay where you are online and book your ticket and then book your plane tickets," she added.

"Then you don't have all those quarrels; all the quarrelling that I don't get the seat I ordered. When you choose online, you already know that those seats are not available, so you choose another, and it makes the playing field level," she said.

'Take it away from principals, ISSA'

Marketing and Communications Manager with the West Indies Cricket Board Carole Beckford, who also used to be media manager for superstar athlete Usain Bolt, agrees about going the online ticketing route. She believes that ISSA should allot a percentage of tickets to the diaspora, season holders, regular patrons, and walk-in spectators.

"We can't have such an international meet with the best performances on the track and field anywhere in the world and not have first-class services to back that up. ISSA's way is backward, not in keeping with any international standards at all," she said.

"Patrons will pay with a first-class service. I am really bothered that in 2017, we are operating like we are in the Dark Ages," Beckford said in a recent blog post, adding that ISSA could make better use of the National Stadium's hospitality suites.

She believes that ISSA could set up satellite venues outside of the stadium, which could attract large crowds.

"Satellite venues have been tried and proven successfully, and maybe what [sponsors] can consider is to do road shows up to a month before Champs to bring awareness to the communities close to where the satellite venues would be located," she said.

Live video streaming is something that is already in place in for major events such as the World Championships in Athletics and the Olympic Games.

Beckford is also a proponent of taking the event out of the hands of the principals and ISSA and hiring a professional event planner to stage the annual five-day meet.

Cynthia Cooke, ISSA Champs executive committee member, in the meantime, also noted that the number of journalists covering the event over the years had increased, making the media section of the Grandstand and the field itself congested.