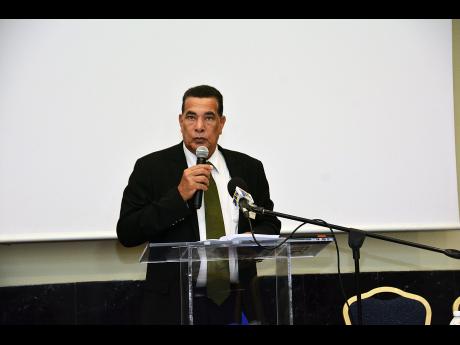 With recent rains causing further damage to the treacherous Long Hill main road in Montego Bay, St James, the concerns of motorists are now heightened as many feel that the slightest error could result in them ending up at the bottom of the deep ravine, which runs alongside the roadway.

With a long history of serious accidents, even when the road surface was in a much better state, the Long Hill Road was increasingly becoming a nightmare - if not a death trap for even experienced drivers - whenever it rained.

"They (the authorities) really need to do something about Long Hill because if you slip, you gone a gully," a taxi operator told The Gleaner recently. "It is a difficult road to use, and the situation gets worse when it rains."

One narrow section of the road, which overlooks a ravine, is currently without embankments, and to compound the situation, a section, which goes around a corner, is riddled with potholes and bumps.

"The potholes them shake up the vehicle and can even puncture your tyres. Some drivers try to skip them on the corners, but that is dangerous," the taxi operator continued. "The authorities need to either widen the road or create a bypass road."

According to Janel Ricketts, the community relations officer at the National Works Agency (NWA) Western Region, they are aware of the situation and plans are in the pipeline for patching work to help address the situation.

"We have a programme that will target sections of the Long Hill Road as well as other areas throughout the parish, but the weather is holding us up right now," Ricketts explained.

However, she said that there were no plans for major work for the treacherous main road at this time. Nonetheless, she gave a commitment that over time, the NWA would be doing all it could to remedy the problem.

Montego Bay Mayor Homer Davis says that the St James Municipal Corporation is also prepared to do some work on the Long Hill main road to help make it safer after numerous complaints about its treacherousness.

"I am prepared to do some work on the road, if it is not done soon, because we cannot have a main thoroughfare like the Long Hill Road in such a state," said Davis. "It is not good enough to accommodate two lanes of traffic sometimes, much less to have people shifting one pothole after another."

He continued, "As a matter of fact, Long Hill Road needs some special attention, and the municipal corporation will be looking at it as a part of our future road-patching programme."

Over the years, several vehicles have got out of control and ended up in the ravine, resulting in several persons being killed.