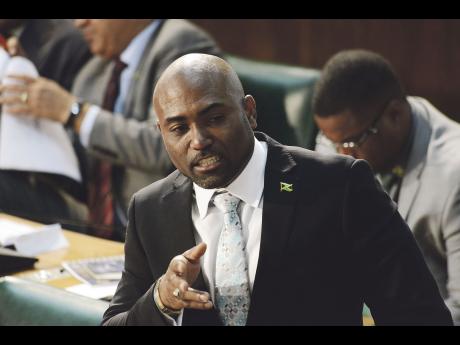 A member of the Andrew Holness-led Cabinet has spoken out, saying Jamaica is not being serious or decisive about whether it will pursue a medical marijuana industry, days after a United States-based advocacy group said Jamaica could embarrassingly end up importing what thrives here.

"We have to be very careful that we do not lose this opportunity," Science, Energy and Technology Minister Dr Andrew Wheatley told the House of Representatives yesterday while making his contribution to the 2017-2018 Sectoral Debate. "We are a blessed nation, blessed people, but we are dilly-dallying too much around with the medical marijuana."

Jamaica, he said, has to make "a conscious decision" on what it will do. "It is either we are supporting it or we are going to just sit by and let it pass by."

Amendments to the Dangerous Drugs Act in 2015 formed the basis for the creation of the Cannabis Licensing Authority, which has responsibility for developing the regulations governing the medical marijuana industry.

But founder and outgoing head of the United States-based Drug Policy Alliance and former Harvard and Princeton academic, Dr Ethan Nadelmann, said the development of the industry here has stalled and "to continue to delay is to risk embarrassment in the eyes of other countries that are doing this properly".

The changes to the law, which included the decriminalisation of possession of two ounces or less of ganja, have come under renewed scrutiny in recent weeks over reports of abuse by children. It prompted a statement from the Medical Association of Jamaica, which said: "We cannot be found guilty of chasing profit at the expense of the health of our people."

Wheatley told Parliament that a draft submission on standardisation of the nutraceutical industry is now in the final stages of preparation and will "in short order" be presented to Cabinet.

But, in the meantime, he said, work on the role of ganja in medicine has to pick up because "nothing has happened and the development of the industry is at risk" despite four research and development orders being issued since the legislative changes in 2015.