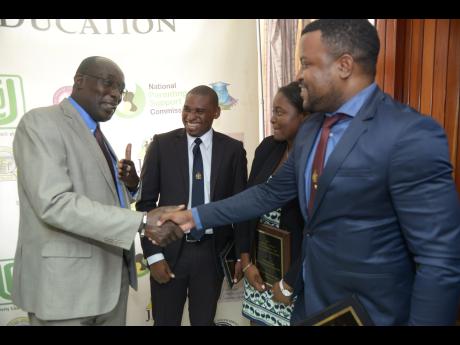 The Government's decision to allocate $300 million to ease the burden on financially challenged students enrolled at the University of the West Indies, the University of Technology, and the Caribbean Maritime Institute has been welcomed by the opposition People's National Party (PNP), as well as the outgoing president of the UWI Guild of Students.

Opposition Spokesman on Education Ronald Thwaites said that he supported the move but questioned the likely impact on needy students already burdened to find funds to pay their tuition fees.

"What I realise is that the $300 million will not be made available until September. It, therefore, begs the question of how it will meet the needs of students who are already facing the tough decision of where to find money to pay in this cycle," said Thwaites.

One solution, he said, could be that universities allow students to sit exams and then withhold the results until the money has been paid over.

In addition, Thwaites is proposing that the Government give scholarships to university students instead of bulk grants. This, he said, offers more equity by allowing students the freedom to choose where they want to study.

He added that the Government could try persuading financial institutions to provide tailor-made packages to students to aid in their goal of higher education in a way that would be beneficial to all Jamaica.

"This, in fact, could be very helpful as it will create more equity among tertiary-level students and give young people an opportunity to make critical decisions about their own lives," Thwaites told The Gleaner.

UWI Guild president Mikiela Gonzalez says that students who are struggling to find the funds to pay tuition would welcome the move.

"On behalf of the guild of students, we are undoubtedly appreciative of this response by the Government to aid the funding of tertiary education. We know many of our students are having financial challenges, and so this will indeed impact them," Gonzalez said.

She also noted that by taking the decision it has, the Government is stressing to the nation the importance of tertiary education.

"What this says to us even more importantly is that the Government of Jamaica has signalled that tertiary education is of priority. Our students, I am positive, will return on this investment when we move on to be the future nation builders," Gonzalez said.

Education, Youth and Information Minister Senator Ruel Reid said that the allocation to UWI was conveyed at last week's meeting of the UWI Grants Committee at the Cave Hill campus in Barbados. The funds from the ministry's budget will be made available as at September 2017.

"We have a very clear commitment. In fact, we'd like to replicate Barbados to say we have one university graduate per household, so a lot of what we are doing is looking very favourably on how we can identify these students coming out of PATH (Programme for Advancement through Health and Education) households and give them support in a very preferential way," Reid said.

Addressing reports that final-year students at the Mona campus would be barred by the UWI administration from sitting final exams if they did not clear outstanding arrears, Reid said that the ministry's permanent secretary had been asked to arrange a meeting with the leadership of the institution to find a solution.

He said that an assessment of the needs of current students would be done to determine what assistance could be provided through the Jamaica Values and Attitudes Project for Tertiary Students, as well as the Students' Loan Bureau.