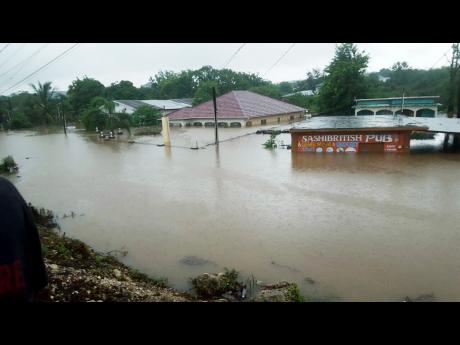 Contributed
Several houses in Palmetto Pen, Clarendon, were almost covered by rising waters on Saturday as a result of heavy rains.

The weather outlook for today is expected to be much better than the last three days, with the Meteorological Service of Jamaica downgrading the flash flood warning for eastern and central parishes, even as it forecasts that some light showers are still likely. This is because even though the rainfall associated with the trough, which affected weather conditions over the western Caribbean and Jamaica, has decreased considerably, instability associated with it could continue to affect the island.

Clarendon and St Thomas were the parishes hardest hit by weekend rains, which induced landslides and flooding, forcing some people to evacuate their homes, while some communities were still cut off up to press time despite the best efforts of the National Works Agency (NWA) and municipal corporation work crews.

Some of the flooding, which rendered major roadways impassable, has since receded, but Stephan Shaw, communications manager of the NWA, is urging motorists and other road users to be careful on the country's roadways.

Horace Glaze, director of preparedness at the Office of Disaster Preparedness and Emergency Management, explained that all 10 emergency shelters, which were opened as a result of Saturday's downpour, have been closed. This, as persons flooded out of their homes found shelter with friends and relatives.

In St Thomas, work was still under way to clear a number of roads that were blocked.

Shaw explained that NWA crews would be monitoring drains and working round the clock to clear them in order to reduce the impact of flooding.

- Hector's River to Golden Grove through Amity - impassable due to flooding