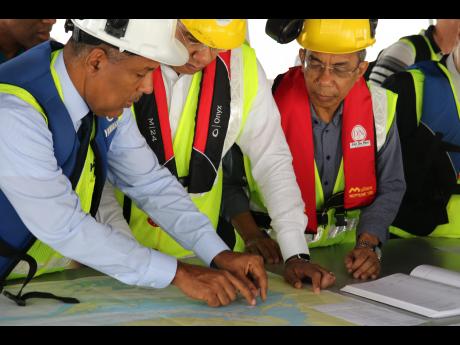 Christopher Serju
Professor Gordon Shirley (left), president and chief executive officer of the Port Authority of Jamaica, highlighting details on a map of the dredging operation to Prime Minister Andrew Holness (centre) and Dr Horace Chang, minister without portfolio in the Ministry of Job Creation and Growth. The men were aboard the cutter suction dredger operating in Gordon Cay during yesterday’s tour of the development work underway at Kingston Freeport Terminal. 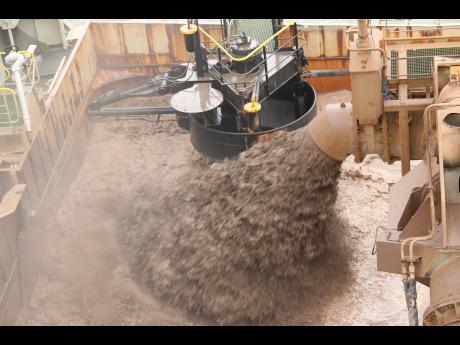 Christopher Serju
Mud sucked from the sea floor at Gordon Cay is transported to another site, where it is deposited under guidelines provided by the National Environment and Planning Agency, which is monitoring the dredging to facilitate expansion of the Kingston Freeport Terminal. 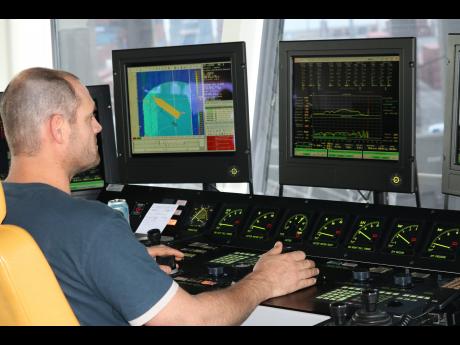 Christopher Serju
Tim Driessen, a first-grade dredge operator, engages in electronic monitoring of the dredging operation on board the cutter suction dredger in Gordon Cay.
1
2
3

Prime Minister Andrew Holness has expressed satisfaction with the scope and pace of development work being done at the Kingston Freeport Terminal to make the facility globally competitive.

"I was very pleased with what I saw today," the prime minister disclosed after an exhaustive tour of the port, describing the multifaceted US$456 million expansion, refurbishing and rebuilding project as "quite a significant undertaking".

After listening to a presentation by Olivier Tretout, chief executive officer of the Kingston Terminal Limited - a subsidiary of the CMA CGM Group, which is undertaking the port development project - Holness got a bird's eye view of the premises from a ship-to-shore gantry crane.

Thereafter, the tour team travelled by tug boat to Gordon Cay, where government officials and journalists boarded a cutter suction dredger and got a close-up view and understanding of the work being undertaken by the French company. This is a result of the concessionaire agreement signed with the Port Authority of Jamaica (PAJ) last year, under which it will, among other things, widen and deepen the shipping channel, refurbish the berths and install more state-of-the-art equipment.

Built 30 years ago, the port was in need of a major overhaul if it was to keep pace with modern-day global shipping demands.

"We would not, at this time, have been able to find these resources with all that Government has to do. We could not leave the assets there to further deteriorate and become irrelevant, (and) this presented us with an opportunity to partner with the private sector," Holness explained.

"If you have the right framework in place, Jamaicans benefit. Assets, which we would not be able to use ourselves because of the fiscal constraints, get to be utilised. In the utilisation of those assets, Jamaicans get employed, Jamaica gets to play a role in the global community. We have to put in place the framework in which the private and public sectors can work together to have the full utilisation of our assets."

Meanwhile, Professor Gordon Shirley, president and chief executive officer of the PAJ, told The Gleaner that, "the investment is being made to ensure the Port of Kingston is redeveloped in a way that makes it one if not, the most competitive transshipment terminal in the western hemisphere."