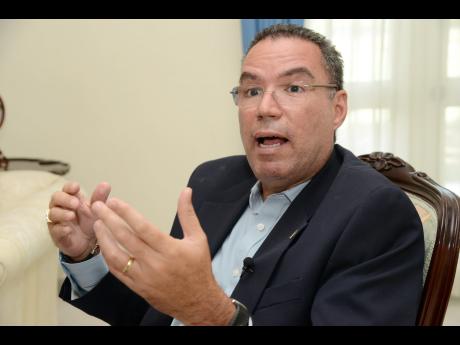 Minister without Portfolio in the Ministry of Economic Growth and Job Creation, Daryl Vaz, says that Jamaica's meteoric rise to fourth in the latest public-private partnership (PPP) programme index for Latin America and the Caribbean is proof enough that the country's economic fortunes are trending in the right direction.

Jamaica now has a 71 per cent rating behind joint leaders Chile and Colombia at 74 per cent. Brazil is rated third at 72 per cent, with Peru rounding out the top five with a 69 percentage rating.

"I am very happy to know that we are trending in the right direction and I do believe that if we can continue to assert ourselves in terms of facilitating PPPs of all kinds, it will give us that push to make the five in three (originally five in four) become a reality," Vaz said.

Vaz, who also has responsibility for the land, environment, climate change and investment portfolios told The Gleaner that the PPP programme was a vital part of the Government's growth agenda.

"Public-private partnerships are critical in how we go about investing in the country. All across the world, this is how it's being done. Jamaica is no different. The fact that we have to grow economically to create jobs is clearly nothing new and, therefore, the public-private partnership is something that, while started previous to this administration, is going to be accelerated," he said.

"We have not yet scratched the surface of the energy and waste-to-energy sectors. And those are two areas that have massive potential for a public-private partnership arrangement. I am sure the respective ministries will be targeting those, as well as the other PPPs that are to be done, not only through the ministries, but also government agencies, some of which are very rich in resources, such as land, and primed for development, which will accelerate and grow the economy," he said.

Managing Director of the Development Bank of Jamaica, Milverton Reynolds, agrees that the development can only be viewed as a huge deal for Jamaica's overall economic trajectory.

He told The Gleaner that the improved rating has placed Jamaica even more in line for local and foreign investments and that it falls in line with the Government's strategy for economic growth.

"This is very significant because we have moved into the top five, and that is huge. It means that, clearly, what we are doing in terms of our PPP privatisation programme is working and is being recognised in the region," Reynolds said.

"We are now poised. We are really in a position to continue to do PPPs, and this is very central and critical in terms of bringing in investment from the private sector, both locally and internationally, as a way of facilitating growth and creating jobs," he said.

The 2017 INFRASCOPE report was released by the Economist Intelligence Unit and the Inter-American Development Bank. The INFRASCOPE survey ranks 19 countries in Latin America and the Caribbean based on their capacity to mobilise private investment in infrastructure through PPPs.

The report defines PPPs as projects that involve long-term contracts between a public-sector body and a private sector entity for the design, construction or upgrading, operation and maintenance of public infrastructure to deliver quality public services and covers projects in the water, transport, solid waste management and energy sectors.

Jamaica was ranked eight in 2014, up from 13th in 2012 in previous INFRASCOPE reports. The 2017 index covered assessments up to March 2017 in five categories: regulations, investment and business climate, institutions, financing, and maturity