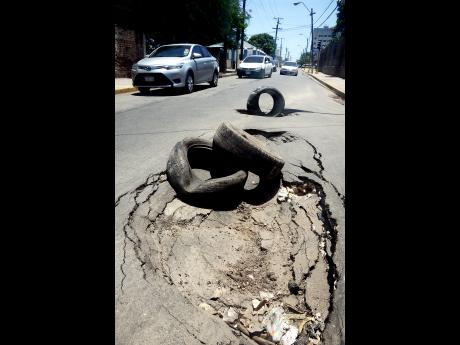 Norman Grindley
Sections of North Street, Kingston, between East Street and Rum Lane, have started to collapse only a few months after major pipe laying and repairs to the road. 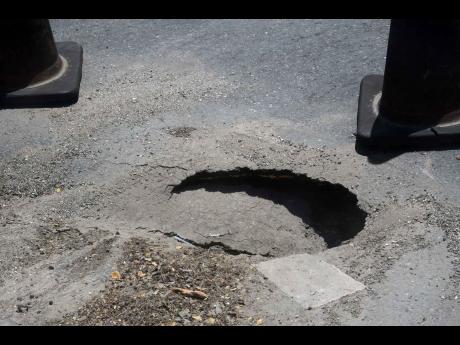 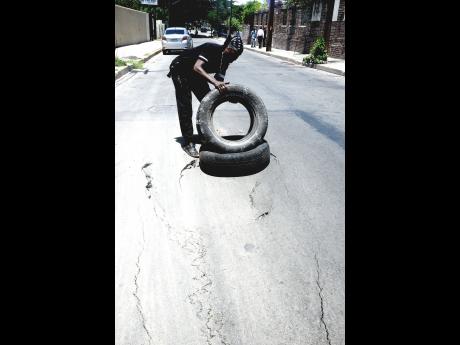 Norman Grindley
Tyres being placed in the road to alert motorists to the danger on North Street but the black tires, themselves, pose great danger to motorists at night.
1
2
3

Those who have traversed the North Street roadway in Kingston within recent days would have had to pay close attention while driving as the freshly paved road continues to sink and crumble at a rapid pace.

The road, which has presented several problems for motorists and nearby residents alike for many years, now has several sinks, one resembling that of a crater, and has rendered sections of the roadway impassable.

In December, the National Water Commission underook a multimillion-dollar rehabilitation project on a section of North Street, which was supposed to remedy the decade-old problem of raw overflowing sewage on North Street near St George's College.

Many stakeholders have said that the choice of material is the reason for the constant repairs and deteriorating state of affairs on the nation's roadways.

"Concrete can easily be integrated into our existing asphalt network, and by reducing load transfer, it protects services under the roadway such as water, sewage, telecommunications and other utilities," Sophia Lowe Pinnock, corporate communications and public affairs manager, Caribbean Cement Company Limited, told The Gleaner in relaying her general advice on the road situation.

"While the price of asphalt is closely tied to the volatile, international oil market, locally produced cement generally enjoys more stable prices. Robust and durable, concrete roadways boast a lifespan of 50+ years and tend to last three times longer than asphalt thoroughfares before any major rehabilitation is necessary. Prone to potholes, stripping, cracking, and other defects, asphalt requires regular maintenance and frequent reconstruction, while concrete will last for decades with relatively minor repairs."

Pinnock added that developing a reliable, safe infrastructure for Jamaica required a forward-thinking approach and a lasting commitment.

"With the savings generated from concrete roads, money could be redirected away from rehabilitation towards building more roads and expanding the transport system. As a result, the island would save much-needed foreign exchange, sustain its local industries, and build a more robust economy."