Show your hand! - Senate votes to make it directors' duty to disclose conflicts of interest 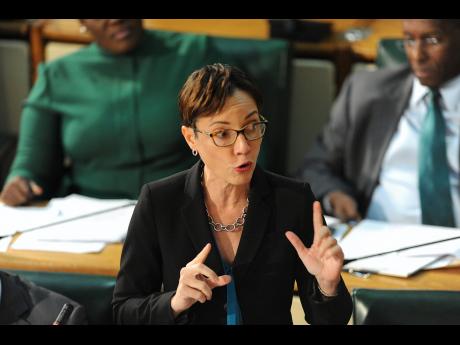 Senators on Friday voted to make it the duty of company directors to disclose situations that present conflicts of interest in legislation aimed at bringing Jamaica into compliance with global standards against money laundering and terrorism financing.

That change was one of 26 made to the Companies (Amendment) Act, 2017, which was approved by the House of Representatives on May 17 with two amendments. The House now has to consider the Senate's changes.

Kamina Johnson Smith, leader of government business, piloted the bill. She argued that Jamaica had to modernise its company laws to avoid being blacklisted.

"We move forward in a global context where matters of counter-terrorism, anti-money laundering, and the general requirement for increased transparency in corporate affairs confront us every day. In this context, Jamaica joined the Global Forum in 2010, and we became subject to Global Forum's Standards," Johnson Smith said.

The amendments, Johnson Smith said, gave "assurance that we (Jamaica) are aligned with global standards so that we are not, in fact, blacklisted".

Her opposition counterpart, Mark Golding, endorsed the legislation. Prior to the vote, he said that among his concerns, was that Clause 13, requiring a director to just avoid conflict of interest situations, was insufficient.

"I'm surprised I have not seen an expressed requirement for a director to disclose the circumstances that may result in a conflict of interest [and] at the earliest opportunity," he argued, adding that a penalty was also needed.

Johnson Smith, after almost an hour consulting with legal officers, accepted the argument and said that the change in favour of disclosure would be adopted. In dismissing some other suggestions, the Senate leader warned that delaying the bill could be "detrimental".

The legislation also makes it a requirement for the provision of information on beneficial owners of companies and shareholders. It also prohibits the issuance of share warrants.